“Observe your life from a new perspective” 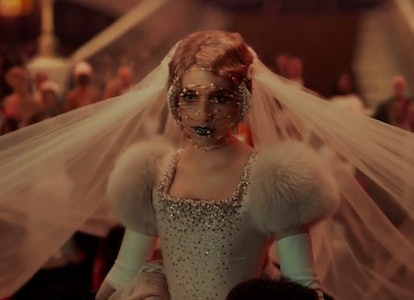 The female-led dystopia genre is having quite a moment. After huge franchises like The Hunger Games and Divergent brought it into the mainstream, shows like The Handmaid’s Tale and Y: The Last Man have solidified the genre’s relevance.

Because the real world is still centered around men, dystopian stories allow women to take the stage. Dystopian stories blur social lines in a way that either disrupts the hierarchy or establishes a new order. Who benefits from those shifts differs from story to story; however, it’s especially intriguing when these stories place women at the center of their narratives.

From Spanish filmmaker Alice Waddington, this 2019 movie exemplifies what makes these dystopian movies so enticing. Here’s why you should watch Paradise Hills, starring Emma Roberts, now on Netflix.

Paradise Hills opens with a dystopian wedding that wouldn’t be out of place in Jupiter Ascending: Uma (Emma Roberts) sings a haunting aria of submission at her wedding to an unseen man. It then flashes back to two months earlier, with Uma waking up in a strange resort known as Paradise.

Paradise is like the resort from White Lotus crossed with Stepford Wives. Uma meets her roommates, plus-size Chloe (Danielle Macdonald) and socially anxious Yu (Awkwafina), and learns about rebellious Amarna’s (Eiza González) backstory. Amarna is a super famous singer sent to Paradise to be kept in line.

The girls think Paradise is a treatment center for rebellious girls, but there isn’t much discipline. They live an idyllic life of tea parties and poofy dresses. But as Uma tries to escape and return to her lost love, she discovers the truth about Paradise — and the truth about her upcoming wedding.

Paradise Hills falls perfectly into the dystopia genre in that it presents itself as a utopia. Everything about Paradise makes it seem like, well, paradise. The horror isn’t the true agenda of the resort. But the way it's hidden from both the characters and the audience, it’s clear that something is wrong from the start. Nobody could imagine the real purpose of Paradise.

There’s a huge twist towards the end of the film, but I can’t even hint at anything without the risk of spoilers. So, I’ll just say this film is a testament to the acting ability of its cast. Emma Roberts and Awkwafina may be working on more sophisticated projects now, but Paradise Hills proves they can still rock a genre story.

If you’re looking for a film that captures the candy-coated high point of the 2010s dystopian craze, look no further than Paradise Hills.

If you like Paradise Hills, you also need to watch this biting 2000s cult-favorite.