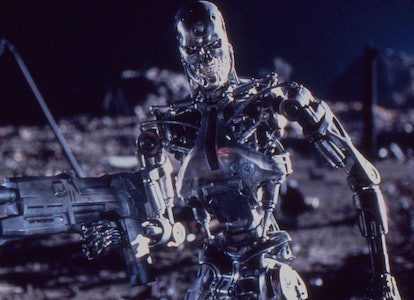 Sequels often ignite the most debate. Just look at the divided discourse surrounding the latest blockbuster sequel, Matrix: Resurrections. Moviegoers either love or hate sequels, and while sometimes viewers can be indifferent to them, for the most part, audiences tend to have strong opinions on where a sequel takes the story’s characters, especially if the movie is part of a major franchise. (See Star Wars Episode VIII: The Last Jedi.)

However, there is the rare sequel that everyone agrees on, and the consensus is more or less settled on placing Terminator 2: Judgment Day high on the pedestal of Hollywood's best blockbuster sequels. It nicely sits alongside director James Cameron's other well-received sci-fi follow-up, Aliens.

Here’s why the 1991 hit sequel remains the most rewatchable sci-fi blockbuster of all time, and there’s no better time to revisit Terminator 2: Judgment Day now that it’s streaming on Netflix.

WHAT’S YOUR FAVORITE SCI-FI MOVIE? Fill out this form for a chance to get paid to write an article for Inverse.

Judgment Day is not only one of the best sci-fi sequels but also the best of the Terminator films. But the bar is not all that high to clear. Some might even argue the real blame behind the Terminator franchise’s woes can be attributed to just how good Judgment Day truly was. Its success regrettably inspired a flurry of new movies that made the classic mistake of learning the wrong lessons from old movies. (Time is cyclical, indeed.)

What's odd, though, is that Judgment Day shouldn't be all that rewatchable on paper, at least within the context of when the film was released. The major twist, where the dreaded cyborg, played by Arnold Schwarzenegger, returns as the protagonist’s ally and goes against an even deadlier foe, is a profound one, yes. But you think of the shock value of that moment when Sarah Connor (Linda Hamilton) turns a corner to see her greatest evil supposedly resurrected, yet now serving as her, her son's, and their world’s only hope… Well, that's not the kind of movie magic you can recreate twice to the same effect.

But we've learned this lesson before. The Empire Strikes Back has a similar lasting power, despite that ending twist being the twist of all twists that broke pop culture and is practically imprinted on children years before their parents sit them down for their first screening. So what makes a sci-fi epic rewatchable has to come down to more than simply surprise and awe, hard as that might be to accept for the spoiler-phobic. Quality has to run deeper and work on more levels than just earning a tilt of the head upon first viewing.

In the case of Judgment Day, it's easy to assume the source of its longevity lies mainly in what the film was and still is revolutionary for in terms of its action movie accolades. The special effects, especially for its time, aren't merely breathtaking. They serve the story's atmosphere, inviting the same level of fear and excitement one feels when being chased by technology that is too overwhelming to comprehend. Years later, this feeling has evolved into a different yet meaningful experience as these effects naturally age.

Rewatching Judgment Day, a film all about how an apocalypse caused by technology run amok was just barely avoidable, you find yourself wondering how much closer the real “Judgment Day” might be at this point. Some may argue we are due for a world-shattering event, especially for a generation that gets one of these every decade or so. We don't typically celebrate films that provoke so much dread, but there's something to be said about the familiarity we seek out in movies that once made us feel something. Even something objectively horrifying and initially unpleasant.

If Judgment Day were simply an action beat-em-up picture with catchy one-liners, it would join a $5 bin with all the forgotten rest. But it's not just an action event movie with superb stunts. It's a horror dystopia that rings truer as time marches on.

Of course, dystopia has its limits, which is why Judgment Day made an impression that its exemplary predecessor didn’t. To have crushing defeat, you also need the possibility of hope. In the first film, the promise of a hero to come offered hope to fight against the nihilism and dangers of the future. So in the sequel, it’s too appropriate for this supposed hero to be a kid in over his head and at the mercy of forces beyond his control, desperately trying to mitigate a catastrophic situation he never asked for. The decision to measure a good Terminator versus a bad one also raises the stakes for the audience.

I can’t presume to understand precisely what someone my age thought of this movie when they saw it in 1991. But in 2021, that parallel to a hellish world inherited by the youngest and most vulnerable among us strikes a chord that reverberates beyond its own era — and fittingly so.