“The only place left to go was up.” 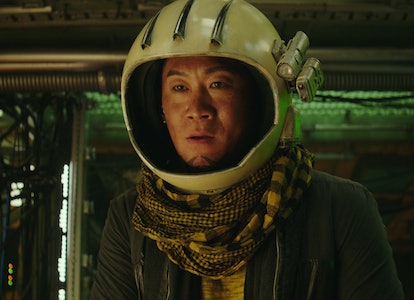 Squid Game changed everything. An unassuming Korean series about the difficulties of economic disparity with a sick, playful twist quietly dropped on Netflix, and it slowly got more popular — and never stopped. Through sheer word of mouth and a prominent place on Netflix’s Top 10, the series became the streaming platform’s most-watched show with 111 million viewers.

But what’s not known is Squid Game was a long time coming. International media, and Korean media in particular, is gaining global recognition, with Squid Game being the latest evidence of this movement. But this Korean movie, which is now streaming on Netflix, basically predicted Squid Game’s success, and it’s the perfect follow-up to the show.

Space Sweepers is a Korean sci-fi epic directed by Jo Sung-hee. Released by Netflix in early 2021, it’s the kind of movie that could only emerge from the streamer — immense in scale, narratively ambitious, and surprisingly multilingual. While most films are directed towards a specific age demographic or even a country or language, Space Sweepers is here for everyone.

The movie follows a group of “space sweepers” — inter-planetary pirates — in a world where the Earth is full of pollution, and the elite lives in a space station orbiting the Earth. This obviously causes a huge classism issue, with the rich are literally looking down on the poor.

The titular space sweepers are perfectly fine just getting by scavenging space debris, but then they stumble on a huge bounty: a small girl named Dorothy with a massive amount of power. As they try to capitalize on the situation, the girl worms her into the group’s heart and reveals some dark secrets, both within the group and regarding her own origin.

While classism and economic disparity are both explored in Space Sweepers and Squid Game, another theme runs like an undercurrent in both works: the love of a single dad for his daughter.

What’s next? You need to watch 2021’s most important sci-fi movie before it leaves HBO Max next week

Just as Gi-hun enters the Squid Game hoping to win enough money to ensure he can stay close to his daughter, two different characters in Space Sweepers go to great lengths to save their daughters with various levels of success. Even Dorothy’s interactions with the crew highlight the importance of found family, be it the former narcotics baron who turns out to be a big softy or the humanoid robot saving up for a female voice and body.

Combine those feel-good emotions with high production values, a stark morality tale, and more languages than you can count; Space Sweepers proves it’s the ultimate Netflix movie. As the streamer releases more works, you can expect these qualities to come back again and again. So, after you finish Squid Game, why not spend some time with a few space sweepers?