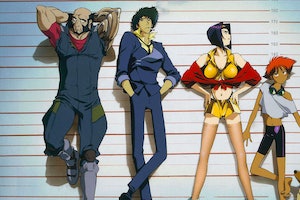 When Adult Swim launched in 2001, one anime show bore the responsibility for introducing an entire generation of Americans to the medium. Luckily, the network picked arguably the most iconic anime series of all time.

At a moment in history when the only anime most American kids were watching was Pokémon, this show revealed how Japanese animation was creating vast and diverse worlds not easily replicated in live-action. It also featured a perfect blend of sci-fi and western tropes.

Taking inspiration from everything from Star Wars to Blade Runner to classic noir and western movies (and featuring the legendary tunes of composer Yoko Kanno), Shinichirō Watanabe's Cowboy Bebop has a deep legacy around the world, influencing a wide arrange of shows and movies ranging from the obvious Firefly to the not-so-obvious like Rian Johnson's Brick.

Ahead of the live-action adaptation’s premiere in November, the original Cowboy Bebop series is finally streaming on Netflix right now. Here’s everything you need to know, and a guide to the only five episodes you really need to watch.

What is Cowboy Bebop?

What if you had cowboys in space and they were really bored half of the time? Cowboy Bebop follows a traveling group of bounty hunters led by Spike Spiegel (a man with the coolest name imaginable) just trying to make a living in the gig economy of the year 2071.

When the show arrived on American shores in 2001, it wowed audiences with its blend of Japanese and Western sensitivities. It was a more violent, mature, and narratively complex cartoon than what was available at the time, yet the combination of western and sci-fi influences made it a more accessible show for newcomers to the medium than other anime like Evangelion or Serial Experiments Lain. Likewise, the story had consequences, but it wasn't fully serialized so you didn't necessarily miss anything if you skipped an episode — at least at first.

The result was a show primed to become a hit in the U.S. and a gateway anime for a whole new generation. The world-building is fantastic, the characters are relatable and nuanced, the action is stunning, you can identify yourself with the themes, and the score is just full of bangers. If you're looking to catch up on the anime phenomenon before the live-action remake hits Netflix, here are the five best episodes to get a good grasp of what the big deal is.

What better place to start than at the beginning? The pilot episode of any show needs to establish the characters and the world in a way that keeps the audience interested for weeks to come. Cowboy Bebop excels at that. The first episode establishes the show’s coolness almost immediately while also making the characters relatable by focusing on their financial worries.

“Asteroid Blue” makes it clear this is not just your average adventure show. It’s a story with deep melancholy. We are introduced to a criminal couple fleeing a crime syndicate after stealing an experimental substance before they run into Spike and his partner Jet Black, and the episode does a great job of building sympathy for the so-called criminals. Plus, there’s enough kung-fu, gunfights, and spaceship chases to establish the unique tone of the show.

One of the things that makes Cowboy Bebop special is how it easily blends different genres to create something unique. This episode more than proves it. A departure from the usual western aesthetics, "Pierrot le Fou" goes full horror with a story heavily inspired by Batman villains.

The story is a classic horror setup. Spike witnesses a murder and has to take down the culprit before they come after him. The murderer? A very creepy clown called Mad Pierrot who’s as indestructible as Jason or Michael Myers. While the episode features some thrilling moments and plenty of nightmarish imagery, Pierrot is also rather funny, more like a Batman villain than a slasher icon, making this a disturbing yet highly entertaining and rewatchable episode.

The beauty of Cowboy Bebop is that it wasn't afraid to take a breather from the "main plot" to deliver fun side adventures, and few are as fun as "Mushroom Samba." After running out of fuel and food (a common occurrence in the show), Ed and the adorable genius corgi Ein find some mushrooms left behind after a shootout. Unsurprisingly, everyone starts tripping after eating a mushroom — including Ein!

Each member of the crew gets their own unique and trippy side story, with the episode combining cartoon slapstick gags with a Blaxploitation homage that makes for a hilarious and exciting mishmash of influences, and also a classic Bebop episode.

By its latter half, Cowboy Bebop's slightly interconnected stories full come to a head, and "Hard Luck Woman" perfectly sets up the table for the two-part series finale by diving into one of the show's main themes — you can't escape your past. We focus on Ed and Faye, exploring their backstories as well as how their time on the Bebop has shaped them.

The episode also brings us to Earth, which has now become nearly uninhabitable after a meteor struck the surface. This is also the saddest and most melancholic episode of the show, with emotional reveals and goodbyes that encapsulate the show's approach to the hardships of being a freelancer.

The fifth episode of the show breaks Cowboy Bebop’s to finally kickstart the "main plot" of the show that would carry over the rest of the season as we explore Spike's criminal past. We are also introduced to one of the coolest yet utterly ridiculous characters in the show, Vicious, Spike's former friend.

As great as the hyper-stylized action and iconic imagery are in the show — there's no beating fighting on a cathedral with a stained glass window in the background — what makes the episode special and memorable is its dark tone and focus on character drama. We may enter Bebop because of its genre-mashing, action and music, but we stick with it because of its characters.