“What if something goes wrong?” 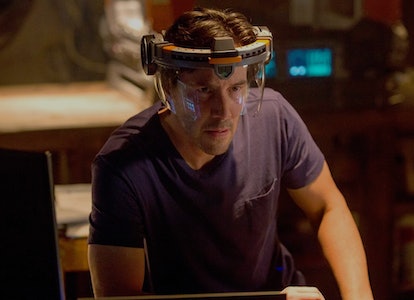 Keanu Reeves movies are all about questioning reality. The Matrix interrogated the nature of reality itself. Bill & Ted explored the space-time continuum. Even John Wick scrutinized the degree to which one man could care about his dog. But this 2018 film takes the cerebral tone of Reeves’ entire filmography to an entirely new level. Here’s why you should watch it now it’s streaming on Netflix.

Replicas is a 2018 sci-fi thriller directed by Jeffrey Nachmanoff. It stars Reeves as William Foster, an experimental neuroscientist looking for ways to replicate the human condition through neural mapping. The film opens with a failed experiment; though he’s able to directly replicate a man’s personality and upload it into a humanoid android, the subject’s consciousness is too overwhelmed by the robot body and instantly deactivates.

Disappointed by his failure, Foster tries to enjoy a road trip with his wife and three children. Unfortunately, the rogue android is only the start of his troubles. After a deadly car crash, William finds himself the lone survivor and a broken man.

His first thought is one any wildly irresponsible neuroscientist would have after a tremendous loss: is there a way to prolong his family’s life? With the help of his assistant Ed, played by an extremely affable Thomas Middleditch, Foster attempts to clone three members of his family but ends up with more than he bargained for.

Replicas is a story about what makes us human, which is a lot for any film to handle. Because of that, the occasional plot hole pops up; but with this caliber of concept, does it even matter? If you can handle personalities being uploaded and downloaded like memes off Reddit, your disbelief can be suspended long enough to buy into Replicas’ somewhat absurd premise.

What’s next? You need to watch the most visionary dystopian sci-fi movie on Amazon Prime ASAP

Though Replicas was Keanu Reeves’ worst-performing wide release film, in many ways it is the platonic ideal of his portfolio: there’s plenty of emotional scene-chewing, lots of moments spent contemplating his own loss and guilt, and lots (and lots) of fancy user interface holograms, plus Reeves agonizing over pressing buttons. It’s not an instant classic, but it’s definitely way underrated.

Replicas is the kind of sci-fi thriller that’s rare to find nowadays: a sentimental, male-led thriller with emotional stakes and familial tensions just as important as its tech. After a career as a dude’s dude, Reeves really gets to flex his feelings as a dad willing to do anything to preserve his family, even if it means breaking every bioethics law in the book.

If you’re a fan of any of Keanu Reeves’ roles — literally any of them — this should be a must-watch. It accurately frames the actor as one of the world’s greatest gifts to science fiction cinema.

Replicas is now streaming on Netflix.