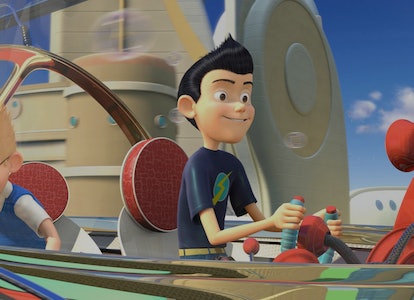 When you think “Disney+” and “time travel,” the first thing that comes to mind is probably Avengers: Endgame. The monumental Marvel film used time travel as a catalyst to conduct a time heist, bring back a past version of Thanos, and show Steve Rogers admiring his own butt.

However, there’s another time travel Disney movie released 12 years earlier that captures all the intrigue and ensemble cast of Endgame, with a lighthearted and slightly less complicated plot.

Meet the Robinsons has a classic Disney movie start. Lewis is a 12-year-old orphan with a knack for inventions, but those inventions don’t make him the most attractive candidate for adoption. While preparing for his local science fair, where he intends to enter a memory scanner, he gets kidnapped by a mysterious boy about his age named Wilbur Robinson.

After his scanner is sabotaged, Wilbur reveals he’s a time cop who needs Lewis’ help with a secret mission. In order to convince Lewis he’s the real deal, Wilbur takes him into the future. There, he meets Wilbur’s offbeat family, strange not only because they’re from the future, but also because ... well, because they’re just strange. Finally, Lewis feels like he fits in — and that’s because it’s his own family from the future.

Of course, this family “preunion” is interrupted by a nefarious villain known as the Bowler Hat Guy — the most Bond-like villain of any Disney movie — who seeks to ruin Lewis’ reputation. But the threat serves as little more than a vehicle for time hijinks, character studies, and hilarious gags. (“Why is your dog wearing glasses?” “Because his insurance won’t pay for contacts!”)

Other than the truly underrated dialogue, Meet the Robinsons boasts a plot that explores nearly every time travel trope. There are grandfather paradoxes, alternate timelines, time loops, and going back into the past with the knowledge any change would greatly affect the future. Plus, the iconic Jonas Brothers time travel anthem “Kids of the Future” was released in conjunction with the film. It’s the definitive time travel work.

Meet the Robinsons slipped into obscurity as one of the few non-musical Disney movies to not secure a sequel. Going up against cult powerhouses Ratatouille and Enchanted certainly didn’t help. But who knows. Maybe a powerful enough fan movement can secure the Robinson family their own Disney+ original sequel or TikTok crowdsourced musical. After all, it’s the future we’re talking about. Anything is possible!

Meet the Robinsons is now streaming on Disney+.

More like this
Entertainment
8.7.2022 1:00 PM
ILM legends reveal the sci-fi movie that changed everything wasn't Star Wars
By Ryan Britt
Entertainment
8.13.2022 3:00 PM
Why the most-derided Star Wars scene ever changed cinema for the better
By Ryan Britt
Culture
8.4.2022 11:30 AM
You need to watch the most successful sci-fi thriller on HBO Max ASAP
By David Grossman
Related Tags
Share: