“Coach, nowhere in the rule book does it say anything about jumpin' too high.” 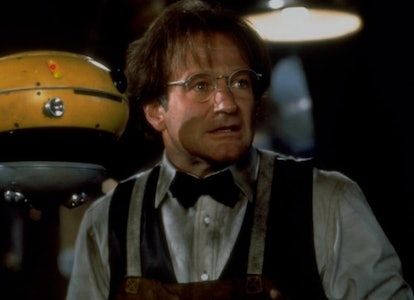 If Disney live-action films were defined by eras, 1997 would be the peak of their experimental phase. After the perfection of the “Disney animated feature” model with movies like Beauty and the Beast, live-action remained the final frontier — and as Disney voyaged forward, no punches were pulled.

This ethos gave us quirky gems like George of the Jungle starring national treasure Brendan Fraser, the iconic Cinderella adaptation starring Brandy and Whitney Houston, and still one more that tops them both: a heartfelt sci-fi remake, which managed to strike the perfect balance in science fiction special effects with surprisingly realistic results. Here’s why you should stream it now on Disney+.

Flubber is a 1997 science fiction comedy written by legendary filmmaker John Hughes as a remake of the 1961 Disney film, The Absent-Minded Professor. From the get-go, it was already an easier sell to audiences. The protagonist of The Absent-Minded Professor was played by Old Hollywood legend Fred MacMurray fresh from the set of The Apartment. Flubber starred Robin Williams, who approached the role with the timid-yet-confident dramatic turn seen in other films like Awakenings but still with his trademark humor.

Williams stars as Professor Philip Brainard, a small-time chemistry professor at Medfield college whose mission to develop sustainable energy keeps him from making it down the aisle with his fiancée, Sara. On the day of their third attempt at a wedding, Philip accidentally creates a green, gelatinous substance he dubs “flubber.”

Upon experimentation, this substance proves to hold an extreme amount of kinetic energy, allowing for bowling balls to bounce like a rubber ball, Medfield’s basketball team to leap across the court in a single bound, and Philip’s car to obtain the ability of flight.

Of course, there are plenty of non-Flubber-related hijinks as well. Weebo, Philip’s floating computer assistant voiced by Jodi Benson (Ariel of The Little Mermaid fame) has a huge crush on her creator and creates a holographic avatar to try and coax him into a Her-like situation. Plus, Philip’s former partner tries to steal his fiancé. The guy can’t catch a break.

One of the great things about Flubber is how it approaches being a remake. Most of the hijinks in the film are directly lifted from The Absent-Minded Professor and then exaggerated, taking full advantage of the newfound CGI technology. So while Weebo may be a practical effect, the bouncing, minion-esque Flubber creatures are rudimentary, but believable, CGI.

Flubber has everything going for it. Built on a strong foundation of the original script, John Hughes adds his trademark emotional touch to create genuinely heartbreaking sacrifices and swoon-worthy romantic beats. Then, the dialogue is treated like a playground by Robin Williams, who says his lines like a Shakespearean actor no matter how ridiculous. Finally, the late-’90s experimental aesthetics push this from a good movie to a great film to a timeless classic.

Flubber is now streaming on Disney+.