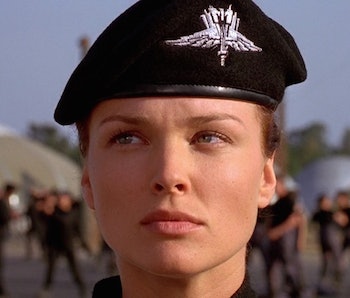 Like Grease or other classic movies that supposedly feature high schoolers, Starship Troopers stretches credibility by casting actors in their late twenties as teenagers. But Paul Verhoeven’s 1997 opus gets away with this detail, and many other absurdities, because nearly everything about the film is a grotesque exaggeration.

Starship Troopers is the most misunderstood mainstream sci-fi film of all time, perhaps because nearly nothing about it is actually what it seems. Here’s why it’s worth a second, more thoughtful look.

You might be vaguely aware that Starship Troopers mocks the notions of mass media and mainstream fascism, but were you aware this it pulls off some of its harshest criticism in the first five minutes? Everything you need to know about this movie happens before you’ve had more than a few bites of popcorn.

Rewatching Starship Troopers in 2022 requires a specific kind of mental gymnastics different from watching a similarly subversive 1980s sci-fi flick. The easiest contrast here is Paul Verhoeven’s masterpiece, RoboCop, in which the critique of corporate greed and its influence on law enforcement and politics is pretty clear, even if it is wrapped in kitsch. But with Starship Troopers, Verhoeven wrapped the kitsch tighter and neater to the point where, unlike RoboCop, the actual final product can be mistaken for having the opposite message of what’s intended.

Despite hilarious marketing to the contrary, RoboCop is decidedly against the idea of a RoboCop. What makes Starship Troopers so odd is that it’s a movie against the type of movie it purports to emulate. Starship Troopers is so deep undercover that it dares to be misunderstood, possibly just to prove a point.

In those first five minutes, we get a parade of propaganda broadcasts about humanity’s impending war with the insect aliens of the planet Klendathu. This breathless montage is unsettling, partly because it’s so silly, but partly because you’re already kind of mindlessly rooting for the human infantry. And then right after that, as the film flashes back a year prior, we’re in the classroom of Mr. Rasczak (Michael Ironside) telling his “high school” kids that democracy was a failed experiment, and that things are so much better now that only those who served in the military get to vote and control society.

This semi-fascist concept comes from the 1958 Robert A. Heinlein novel that Starship Troopers was based on. The idea that Heinlein was in support of this notion in real life is a bit fuzzy, but what’s not fuzzy is the idea that the film version is decidedly against this kind of thinking. That said, the film doesn’t change the bizarre world in which its characters exist; it simply demonstrates the grossness of the fact that everyone accepts the rules of their anti-democratic and downright bizarre reality.

The characters in Starship Troopers aren’t really encouraged to reflect on the state of the world they live in, partly because the film is trying to trick us into thinking this whole thing is secretly a rom-com. About an hour into the movie, we get a scene where Rico (Casper Van Dien) gets into a brawl with Zander (Patrick Muldoon) over their shared love of Carmen (Denise Richards). Leading up to and even during this fight we hear the 1994 dream pop hit by Mazzy Star, “Fade Into You,” seemingly as diegetic music that’s actually heard by the characters too.

Everything you need to know about Starship Troopers exists in this strange choice. There’s sincerity in “Fade Into You,” but not a touch of nostalgia. In 1997, the song was still contemporary. And yet, because this film takes place a couple centuries from now, Mazzy Star would be considered throwback music, kind of like Captain Kirk listening to the Beastie Boys in the 2009 Star Trek. But there’s no attention drawn to the song, and strangely it also plays during a big fistfight. It’s the kind of decision that feels more at home in a David Lynch movie, like the use of Roy Orbison’s “In Dreams” in Blue Velvet.

Starship Troopers isn’t quite as layered as a Lynch film, and it’s not even as subversive as Verhoeven's other films. Most of the time, Starship Troopers is pretending to be a straightforward pro-military sci-fi action flick. But it tips its hand in the third act, and when Carl (Neil Patrick Harris) reappears, clad in what can only be called Nazi cosplay, the larger point of the movie starts to reverberate. These starship troopers maybe aren’t the heroes after all, and maybe you should have noticed a little earlier.

Starship Troopers is streaming on Netflix.