“You don’t need to worry anymore.” 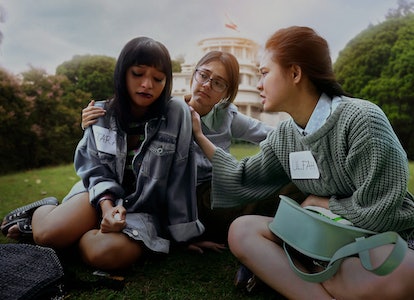 Movies can help audiences process tragedy. Through the early stages of last year’s outbreak, Netflix viewers flocked to watch Contagion, finding some semblance of comfort in the idea of an even-worse-case scenario.

Now, 18 months into lockdown, comfort-food cinema looks a lot different. One new Indonesian movie, streaming on Netflix, depicts a terrible world of cults and arranged marriages — but it’s also a world recovering from a virus, which is comforting in another way.

A World Without is a 2021 Indonesian movie directed by Nia Dinata. It follows three 16-year-old girls as they begin life in a new kind of community. In 2030, ten years after a viral outbreak, birth rates have fallen and capitalism has ravaged the Earth. In response, a charismatic leader named Ali Khan has founded a commune where girls and boys are trained in their passions until they turn 17, at which point they’re paired up and married off.

But for Ulfah, Tara, and Salina, this idyllic life quickly turns ugly. Though they each receive an opportunity to achieve their ambitions — a store for Ulfah, beauty influencing for Tara, and filmmaking for Salina — their supposed “perfect matches” turn out to be anything but.

The leader of the group known as The Light is Ali, who is constantly referred to as “Esteemed Leader.” He asks Salina to create a documentary about his life; while she films him modeling the perfect relationship with his wife, she discovers a dark underbelly of seedy funding, manipulation, and even polygamy.

Though the first act may make this film feel like yet another teenage dystopia, be warned that this isn’t The Giver. The stories of these girls veer into extremely grim but realistic territory. They may be only teenagers, but the issues these characters deal with are decidedly adult.

Though it’s a cult thriller, A World Without is also a dyed-in-the-wool sci-fi movie. Students run around with transparent smartphones and smart wristbands, while the costumes and production design depict a world that’s futuristic in a feasible way. It’s ten years in the future, not 50, so there are still text messages and memory cards, but these devices have been streamlined.

The cult aspects of this film are nuanced but palpable. In one scene, Salina is perusing Ali’s bookshelves and picks up a book about Osho, an Indian mystic known to Netflix viewers of the subject of hit docuseries Wild Wild Country. Ali’s entire playbook is ripped from Osho: controlling what people wear, making the community self-sufficient, and promising the community is the last hope for the Earth.

If you’re looking for something different on Netflix that exists both as a chilling dystopia and a glimmer of hope for a post-pandemic world, look no further than this hidden gem.

A World Without is now streaming on Netflix.

More like this
Culture
7.26.2022 11:30 AM
You need to watch Christopher Nolan’s most important sci-fi movie before it leaves Netflix next week
By Alex Welch
Culture
8 hours ago
You need to watch the grittiest alien invasion movie on Netflix ASAP
By David Grossman
Culture
8.3.2022 11:30 AM
10 years ago, the worst Philip K. Dick movie ever, pulled off something amazing
By Ryan Britt
Related Tags
Share: