“Frankly, I’m amazed any of you survived.” 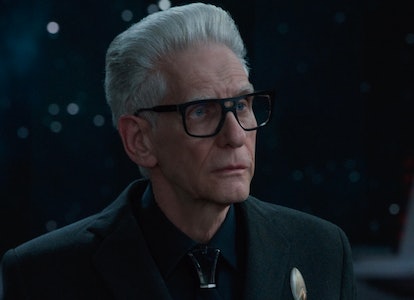 The 32nd century has a shadowy guiding force. In the year 3189, as seen in Season 3 of Star Trek: Discovery, the enigmatic Dr. Kovich wears a vintage 21st-century suit and giant glasses. In the world of Star Trek, only the legendary James T. Kirk wore glasses in a future where poor vision is corrected with technology. But with Kovich, the big spectacles are an effect. When questioned why he wears them, Kovich replies, “I like them.”

In 2021’s Discovery Season 4, Kovich returns, and the more we see him, the more questions we have. Played by legendary film director David Cronenberg, Kovich might be the future of Star Trek, while holding the keys to its past.

SCENE STEALERS is a countdown that salutes the unforgettable small-screen characters of the year. Kovich is #27.

In Season 4’s fourth episode, “All Is Possible,” Kovich deepens the mystique surrounding his character. At the same time, he set a course for an entirely new direction for the franchise. In the stand-out episode of the season so far, Kovich recruits Tilly (Mary Wiseman) — Discovery’s pluckiest audience surrogate — to lead a training mission with cranky Starfleet cadets. Because so many planets have been separated from one another, Kovich is worried Starfleet officers won’t cooperate as in the days of Kirk, Picard, Janeway, and Sisko.

“That’s why I’ve been asked to consult,” Kovich says coldly. “One might say that today’s exercise is about the very future of Starfleet.”

For Star Trek fans, Kovich is a fascinating confluence of continuity. When he first debriefed the crew, after they time-traveled forward to the 32nd century in Season 3, fans speculated he was from the Mirror Universe, a member of the spy group Section 31, or both. In the episode “Terra Firma, Part 1,” Kovich revealed his knowledge of the multiverse. For the first time since 2009, the canon of the J.J. Abrams films (the “Kelvinverse”) connected with the Prime Trek timeline, proving that both universes are, in fact, aware of each other, all thanks to him.

But who is Kovich, really? In Season 4, the fact he’s “consulting” with Starfleet Academy suggests it’s not his regular job. What exactly is his role in the Federation? And why does he know more than anyone about anything? With Kovich, the more questions we ask, the less we know.

Speaking to Star Trek Explorer in 2021, Cronenberg said Kovich “is not just an interrogator” but “kind of a cultural historian.” Despite all the deep-cut questions fans have about his character, Cronenberg himself is blissfully unaware of these implications. He mentioned many times his appearances on Discovery are because he’s “cheap and available.”

Cronenberg is better known for his work as a film director of sci-fi horror classics like The Fly and Scanners. As a self-professed fan of 1960s Star Trek, he may have been inspired by classic Trek in his capacity as an artist. In 2020, the director told Variety that he was a fan of the original.

“Especially in the ‘60s — when the original series was playing — I considered myself a potential novelist,” he said. “I never thought that I would be in film at all.”

“He unites different forces on the screen.”

There are not any direct connections between Cronenberg’s career as a film director and Star Trek. But as Discovery proves repeatedly, the story of Star Trek isn’t a straight line. Even if his past is shrouded in mystery, Kovich is boldly going where even Star Trek hasn’t gone before.

Not only does he reboot Starfleet Academy, but he poaches Tilly from her role on the USS Discovery. By the end of the episode, Tilly departs to join Kovich and teach the next generation of Starfleet. Could there be a spinoff series? Is the long-rumored Starfleet Academy show actually going to be about Kovich’s cold-hard personality butting heads with Tilly’s warm enthusiasm? The future of Trek is as vast as the final frontier.

Cronenberg joining Discovery is poignant. While Twitter might make you think new era Star Trek is a cultural and generational battleground, Cronenberg’s presence proves that kind of thing matters less than fans think it does. Cronenberg’s an old-school Star Trek fan. He’s a famous film director. And he’s on Discovery, bridging the gap between old and new. His brief scenes with Tilly are so wonderful because he unites different forces on the screen.

Cronenberg is part of a huge legacy of genre filmmaking, and Discovery is just one part of the science fiction TV renaissance right now. Just as Kovich knows about alternate dimensions and timelines, Cronenberg proves that loving the past doesn’t mean you should fear the future.