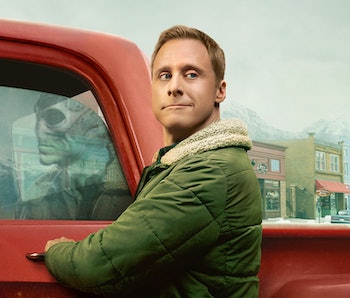 This article about Season 1 of the series Resident Alien was originally published on January 26, 2021 and updated on January 9, 2022 following the release of the season on Syfy. Read on for the original article, with some new changes to reflect the latest updates on this topic.

Not all comic book tales are superhero stories. Resident Alien, one of Syfy’s newest series, fully embraces that idea.

This is an alien invasion story inspired by the Dark Horse comic by Peter Hogan and Steve Parkhouse and adapted for the screen by long-time Family Guy writer Chris Sheridan. But it’s more than just that. Resident Alien is a mashup of influences, taking style notes from John Carpenter’s genre cult fave They Live and procedural mainstay Law & Order with a bit of Doc Hollywood and a sprinkling of Monk in there, for good measure. Oh, and it stars sci-fi mainstay Alan Tudyk.

When was the Resident Alien Season 1 release date?

What is the plot of Resident Alien?

Resident Alien follows the story of an extraterrestrial who crash lands on Earth after a failed mission to destroy all humans. Trapped in a small town called Patience, Colorado, the alien takes the human form of one Dr. Harry Vanderspeigle (Alan Tudyk) — after he kills the real guy — and attempts to fit in while hunting for the pieces of his crashed ship to complete said mission. And since the town doc has fallen dead, Harry’s now put in a precarious position to take up the mantle and help the humans in town.

“I just want to kill everyone,” Tudyk tells Inverse. “And I’m terrible at pretending to be a human, the thing I want to destroy. I didn’t plan to be here on Earth; I didn’t plan on interacting with any humans. So I don’t know anything about them when I accidentally crash land. It’s where so much of the humor comes from which is all that trying to learn how to make the body work, and how to speak, and how to make the mouth work.”

The character actor, who’s won fans over with her work in the likes of Firefly, Tucker and Dale vs. Evil, and Doom Patrol, has finally found himself at the top of the call sheet. That doesn’t mean the starring role of Dr. Vanderspeigle is that far off from the ones that have made him famous. In fact, Tudyk sees some similarities between Harry and K-2S0, the Star Wars droid he played in Rogue One.

“K-2SO definitely has that same way of speaking to people,” Tudyk reveals. “You know, there used to be a line when he first meets Jyn Erso (Felicity Jones): ‘No one likes you. Everyone talks about you, and then when you come into the room, they stop. When you leave, they start talking about you again.’”

It’s a moment that makes Tudyk giggle. “It was in an early cut of the movie. And that seems like something that Harry could say. ‘No one likes you.’ He’s like a petulant little kid. I am drawn to that. There’s a lot of humor there. It’s really fun.”

Who’s in the Resident Alien cast?

Joining Tudyk in the series are co-stars Sara Tomko (Once Upon a Time, Sneaky Pete) as Asta Twelvetrees, Alice Wetterlund (Silicon Valley, People of Earth) as D’Arcy Bloom, Corey Reynolds (The Closer, Murder in the First) as Sheriff Mike Thompson, and Levi Fiehler (The Fosters) as Mayor Ben Hawthorne.

Genre icon and Terminator alum Linda Hamilton appeared later in the season as General McCallister, who Deadline describes as “a high-ranking general who seemingly plays by the rules and runs a tight ship but secretly oversees a covert operation looking for aliens.”

We’d be remiss if we didn’t mention the child talent on the series, too. This is where the They Live component comes into play as Judah Prehn (Kinderwood), who plays a nine-year-old boy named Max, ends up being the only one in town who can see Harry’s true alien form. This provides an unexpected element of comedic competition between the alien, who wants to murder the boy, and the kid who wants to expose Harry.

“I love Judah, he’s fantastic,” Tudyk tells Inverse. “Gracelynn [Awad Rinke] is another young actor who’s with him. They end up teaming up basically, against me. She plays a character named Sahar, and she’s just whip-smart. I mean, in real life, they’ve kind of got me outmatched.”

How long is each episode of Resident Alien?

The alien invasion dramedy featured a total of 10 episodes in Season 1, each featuring a running time of one hour.

Where can I watch Resident Alien Season 1?

Previously, viewers will be able to watch the first two episodes for free on Syfy’s YouTube page. The series is only available on streaming platforms like Hulu, Peacock, and YouTube TV with a subscription.

Is there a trailer for Resident Alien Season 1?

Was Resident Alien renewed for Season 2?

Yes! Resident Alien was renewed for a second season in March 2021, shortly before the conclusion of Season 1. Season 2 is set to premiere on January 26, 2022.

More like this
Entertainment
7.27.2022 4:15 PM
Everything we know about Rick and Morty Season 6
By Corey Plante
Entertainment
7.25.2022 11:00 AM
Paper Girls release date, time, plot, cast, and trailer for Prime Video’s sci-fi series
By Jeff Spry
Entertainment
8.6.2022 1:30 PM
The Mandalorian Season 3 could bring this video game character to live-action
By Dais Johnston