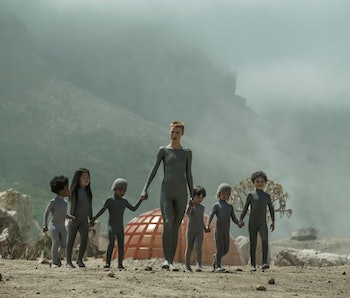 Raised by Wolves was made for 2020 — a baffling, unpredictable, somewhat unnerving, and completely weird science fiction show about a world-ending war between faith and science. There's also Ridley Scott, white goopy androids, Ragnar Lothbrok (we mean Travis Fimmel), and a vengeful Mother robot. (When she decides to pluck her eyes from her skull, watch out for the blood mists.)

Who'd have thought a slow burn, sporadically violent, and sometimes disjointed philosophical exploration of humanity's knack for destruction and thirst for creation would become a highlight for so many viewers? HBO Max knew the rarity they had on-hand as the streamer already renewed Raised by Wolves in September 2020 just two weeks after the series premiered. WarnerMedia said the show was "the top-performing [HBO] Max original since the platform's launch." Now that the first season has ended, leaving a lot for us to unpack, a whole ark-load of questions still need to be answered.

So what's in store for Season 2? Here’s everything we know.

What happened at the end of Raised By Wolves Season 1?

What started as a dystopian tale of two androids, simply named Mother (Amanda Collin) and Father (Abubakar Salim), seeking refuge on Kepler-22b, a desolate planet slated for the birth of a new atheistic human civilization, turned into a multi-layered battle between man, machine, and something else altogether. As the series continued, the synthetic humans did their best to raise their isolated family amid the threat of an invasion by the Mithraic army. This religious faction worships the sun and escaped Earth before it was completely destroyed.

Throughout the season, we watched as Marcus (Fimmel) and Sue (Niamh Algar), a couple of fakers masquerading as Mirthraic soldiers, became bonded to Paul, their would-be son, if it weren't for their true identities hiding under their surgically-renewed faces. Their own Atheist beliefs came into question as the story progressed, leaving Marcus convinced he was touched by the Mithraic god Sol as Sue moved to protect Mother and her unborn baby at all costs.

This brings us to those final minutes from the finale, titled "The Beginning," which found the android indeed giving birth to whatever ended up impregnating her on her sojourn into the forest earlier in the season. But instead of it being the child she thought her maker had given her during her digital trip down memory lane, a toothy, flying, eel-like parasite shot from her gullet and immediately began suckling at her abdomen.

After all this time, Kepler-22b was revealed to be a whole different sort of planet entirely. It's full of secrets and mysteries and sort of akin to a haunted house, as Guzikowski explained to Decider. And all those weird feral creatures? It turns out they're a bunch of devolved humans, which leads to the realization that people lived on this planet thousands of years ago, as did dinosaurs. What the heck is going on here?

The season ended with the reveal of a Mithraic ship full of atheists hovering over the planet, alluding to further conflict ahead, as Father ushered Mother to safety while the parasite baby, now a gargantuan behemoth, took flight.

When is the release date of Raised by Wolves Season 2?

Raised by Wolves Season 2 will be coming on February 3, 2022. An initial release window of early 2022 was confirmed in a teaser that showed before the HBO Max version of Dune in October 2021. The teaser trailer for the season confirmed the premiere date.

How many episodes will Raised by Wolves Season 2 be?

According to Guzikowski, the new season will feature a scaled-down structure of just eight episodes instead of the 10-episode length of the show's first installment. As he told Collider, "It could potentially be eight, but we’ll see. Eight or 10. I think eight is the new 10 now is what I’m hearing for streaming… I think eight is enough."

How many seasons will Raised by Wolves have?

From the very beginning, Guzikowski has stated he has a five or six-season story arc in mind for the HBO Max series. The show-creator just inked an overall development deal with the streamer, making it a very good chance he’ll see that plan to fruition. It also helps that he knows how he wants the story to end, which really helps to put his overall mission into perspective.

What is the plot of Raised By Wolves Season 2?

According to Collider, Season 2 will have Mother and Father and their brood of six human children joining a newly formed atheistic colony in Kepler 22b’s mysterious tropical zone. Amid navigating the strange society, Mother’s “natural child” ends up threatening to drive away any little remains to human existence.

As we mentioned above, there are many questions left unanswered as we wait for the new season of Raised by Wolves to arrive. What ended up happening to Tally, who disappeared earlier on in the series, only for different characters to discover her illustrations and dolls? With the discovery that the feral creatures on the planets are indeed devolved humans, does her storyline involve them in some way? That’s just one story detail we hope gets explored further in the upcoming seasons.

And, of course, there’s the whole Marcus situation — his transformation from atheist to religious zealot will definitely throw an entire load of wrenches into the already eye-watering plot.

“He was completely powerless and he got to this planet and suddenly he was hearing a voice and everyone was worshiping him, and he lost his mind, essentially,” Guzikowski explained to Collider. “And in the process, he’s kind of been broken down into his most essential elements, as it were. So I think in Season 2, we’re going to see a sort of rebirth, as it were. He’s going to kind of redefine himself in Season 2.”

Who is in the cast of Raised by Wolves Season 2?

Will Ridley Scott return for Raised by Wolves Season 2?

“It’s a very rare bird, this story,” Ridley Scott said to The New York Times, regarding his decision to become a part of the series. “I thought: ‘Oh my god. I’ve got to do this. I’ve got to set the pace and direct the pilot.” He did just that, helping to storyboard the series and create the aesthetic that informed the costumes, spaceships, and the overall design of Kepler-22b. Scott ended up directing the season’s first two episodes.

At this point, we just don’t know if the sci-fi icon will be returning to helm more episodes of Raised by Wolves. Allegedly, he’s interested in coming back. But Ridley Scott has a busy production schedule, which can get even tougher to predict given how the pandemic has affected the entertainment industry.

Is there a trailer for Raised by Wolves Season 2?

Yes! The teaser was released on December 3, 2021. You can check it out below.

More like this
Entertainment
8.9.2022 1:00 PM
Has your favorite HBO Max show been canceled? The fate of 9 sci-fi series revealed
By Robin Bea
Culture
8.3.2022 9:00 AM
7 amazing sci-fi shows and movies coming to HBO Max in August 2022
By Robin Bea
Entertainment
14 hours ago
Everything We Know About 'For All Mankind 'Season 4
By Ryan Britt