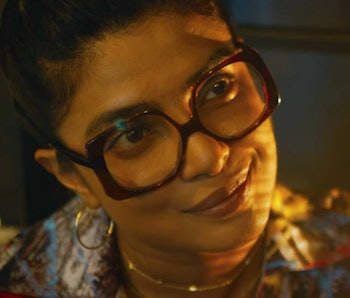 One of the most enigmatic characters in The Matrix Resurrections is played by the Indian actress Priyanka Chopra. After catching our attention in the original trailer where she leafs through a copy of Alice in Wonderland, Chopra’s character only gets two short-but-essential sequences in the movie itself. But understanding her character is key to deciphering the plot of The Matrix Resurrections, so let’s dive in.

Priyanka Chopra shows up twice in The Matrix Resurrections. The first time is in the Matrix itself, where she plays a stranger casually coaxing Neo into discovering the truth about his simulated life. Later, she reveals herself to be a friend of Niobe and a key ally to humankind. But who is Chopra’s character? Turns out we’ve seen her before. She’s Sati.

What happened to Sati in the Matrix trilogy?

Sati appears for the first time in the first minutes of The Matrix Reloaded at the Limbo station scene, a place for programs who serve no purpose in the Matrix. She’s an “exile” program, born from the union of two other programs, Rama-Kandra and Kamala. Sati was created by her parents without a specific purpose. The Architect considers programs like Sati to be a blight on his perfect Matrix, but the Merovingian is willing to help save her from deletion. In this scene, she briefly meets Neo, and they bond.

In The Matrix Revolutions, we see that Sati has been taken in by the Oracle and her protector Seraph. However, Agent Smith infects Sati with his virus programming and later possesses The Oracle, too. Then, at the end of Revolutions, it’s revealed that the Oracle planned for that to happen. She sits on a bench with Sati as they look out over a new dawn for the Matrix and wonder if Neo will ever return.

Who is Sati in Matrix Resurrections?

In The Matrix Resurrections, we meet a new and improved Sati. This Sati, we learn, lost her father at the hands of the Analyst (Neil Patrick Harris) when he purged the Matrix of useless programs. She guides Neo into this deadlier and new version of the Matrix. She even seems to have a level of presence reminiscent of the Oracle. But how?

Here’s one plausible explanation. In the original trilogy, the creation of the Smith virus was a risky move by the Oracle to stir things up with the Architect and ultimately end the conflict between humans and robots. Smith infects Sati and then infects the Oracle, but that’s exactly what she wanted to happen. The Oracle defeats Smith from the inside (with a little help from Neo) and a temporary peace is achieved.

But when Sati and the Oracle reemerge after Smith is defeated in Revolutions, could it be that some of their code got mixed up? Maybe Sati got the best part of the Oracle (the caring and brilliant part) while her less-positive characteristics (like scheming and using others as pawns) went to someone else entirely.

The Matrix Resurrections is currently in theaters and on HBO Max.