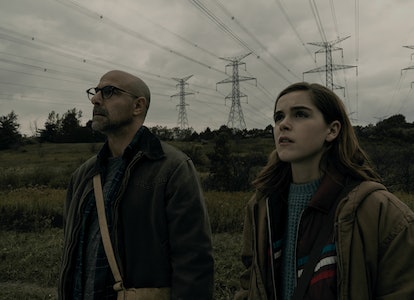 Post-apocalyptic movies usually fall into one of two categories.

In one lane, we see the beginnings of a world-ending event, be it a pandemic, an alien invasion, or a catastrophic weather occurrence. We see characters shift from normal life into full-on survival mode as they try to get through the newfound dangers of the day.

In the other, that shift to a new way of life isn’t the focus. Instead, the conflict comes from other survivors, who clash against our heroes in a kill-or-be-killed world. This 2019 Netflix original bridges these two categories and adds a dark cult twist.

The Silence is a 2019 horror film directed by John R. Leonetti, adapted from the Tim Lebbon novel of the same name. On the surface, admittedly, it looks like a retread of A Quiet Place, in which a family of four, including a young Deaf girl, try to survive in a world newly menaced by monsters who hunt using sound.

What’s in your apocalypse bag? Vote in our reader poll.

But there are some key differences between The Silence and A Quiet Place. Kiernan Shipka’s Ally, the protagonist and narrator, has only been Deaf for three years, though she has adjusted and learned to read lips, also signing along with the rest of her family. Pre-doomsday, the biggest threat to Ally’s life was nothing more than a few bullies — until a horde of cave creatures known as “vesps” started swarming through major cities.

It’s quickly learned that the vesps, who evolved underground while living in cave systems, are blind and hunt by sound. Ally’s family is soon restricted to living as silent a life as the one Abby experienced already, communicating with a mixture of American Sign Language and hushed whispers.

“What seemed like a challenge at first has actually turned into an opportunity,” director John R. Leonetti explained to The Hollywood Reporter. “You can really take a character’s emotions and take them to another level just by using a sign, a facial expression or tone of voice, if it’s normal, or a whisper.”

But while the vesps may have a glaring weakness that The Silence eventually explores, there’s another threat Ally must face: other survivors.

While on a mission to retrieve antibiotics for Ally’s mother, she and her father encounter a man dressed like a reverend. He uses a pad of paper to welcome them to the “flock of the hushed,” a religious cult that appears to be welcoming the apocalypse head-on. Their survival technique? Members of this flock cut out their own tongues.

While Ally and her father are able to avoid the reverend at first, he returns with a vengeance in the form of a young girl wearing a noisemaking suicide vest. The flock wants Ally because she’s “fertile,” and their mission to capture her makes them the (extremely creepy) antagonists of the film, even more than the vesps.

The film isn’t perfect. Casting a hearing actress like Shipka as a deaf character comes across as quite frankly disrespectful of the many deaf actors who sign fluently and could hold their own in a movie like The Silence. But Leonetti has defended his choice to cast the actress. “She learned to sign for the film, and now she’s flawless, like she’s been signing her entire life,” he told The Hollywood Reporter. “She seems to have an almost innate sense of what it’s like being a deaf person.”

Though The Silence may not have the best Rotten Tomatoes score, it’s definitely underrated. The premise may seem overdone, but the script — expertly brought to life by Shipka and co-star Stanley Tucci — sheds light on so many aspects of apocalyptic scenarios that other films in this genre haven’t considered. What do you turn to when things are hopeless? Faith. And in a world where communication is limited, that faith can quickly lead to the founding of new cults that pose just as much a danger to survivors as monsters rising from the Earth.

The Silence is now streaming on Netflix.