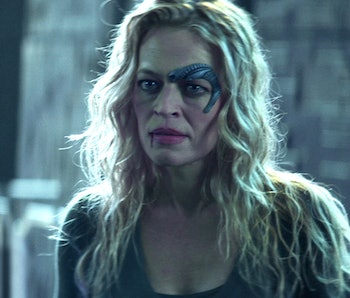 As most Trekkies will tell you, there are only two major timelines in the Star Trek canon: the Prime universe and the Kelvin universe. The latter is reserved for the three J.J. Abrams reboot films, while the Prime timeline is, well, everything else. But are we sure those are the only options when it comes to Trek canon?

The bombshell new trailer for Star Trek: Picard Season 2 suggests that Jean-Luc and the crew of the La Sirena will be caught in an alternate timeline, one that has been accidentally created. Who or what has created this timeline is unclear, but there are larger implications for Trek beyond just another topsy-turvy bizarro universe for the series to explore.

From a certain point of view, it’s very possible that Picard is setting up a new direction for the franchise to permanently steer in, effectively making this new season the Loki of Trek canon. Mild trailer spoilers ahead. Wild speculation follows.

What if Picard Season 2 doesn’t fix the timeline?

In the trailer for Picard Season 2, Q tells Jean-Luc, “Welcome my friend, to the very end of the road not taken.” We’re then told “time has been broken,” and we’re given a lot of visual evidence as to how it has been broken. There’s a funky-looking new Starfleet badge, people are wearing more black than usual, Seven no longer has a Borg implant, Soji is wearing fancy dress, and there seems to be a new faction of the Federation (maybe?), complete with its own logo.

How much of this comes from a branch in the timeline pre-Picard is unclear. In some of the scenes, we see Picard and Raffi in their Starfleet dress uniforms, which seems to imply a flashback to the era of the other flashbacks from Picard Season 1. In other words, perhaps the new timeline is connected to events surrounding the failed evacuation of Romulus and the Synth ban that served as Season 1’s prologue.

What if this timeline is a world in which Picard was successful in evacuating Romulus, or maybe one in which the supernova didn’t occur? Sure, it’s also possible that the new timeline split could occur pre-TNG, or even further back into the canon. But for the sake of argument, let’s say the timeline change is within the established Picard timeline. At the beginning of the trailer, Picard is looking for Laris, his Romulan housekeeper. If the evacuation of Romulus happened in a different way, then it makes sense for Laris to suddenly not be working for Picard. In this timeline, she might not be a refugee.

So, if the timeline change impacts the Picard era, we’re looking at a setting at some point between the early 2380s and 2399. And if the supernova is involved, then we might be looking at some major retcons across two universes.

The events of Picard created the Kelvin timeline

In the very first episode of Picard, “Remembrance,” we’re reminded of the anniversary of the Romulan supernova, a catastrophic event that, in 2387, fractured the Romulan Empire and killed countless Romulans in the Beta Quadrant. But, this supernova also inadvertently sent Spock back in time, along with Nero, creating the Kelvin timeline of the reboot films. If something about those events is altered, then it stands to reason that Picard could, in theory, either reconcile the Kelvin timeline into the Prime timeline or possibly collapse them into one timeline.

This is tricky stuff. After all, Picard wasn’t the only person trying to help the Romulans. Spock also tried to use red matter to absorb the shockwave of the supernova, which, created a black hole that manifested in the Kelvin timeline. In other words, if Picard had successfully evacuated Romulus, Spock wouldn’t have needed to come up with that last-ditch rescue effort. As such, the backstory of Picard would be responsible for the attack on the USS Kelvin in an alternate 2233. Changing the backstory of Picard would impact both timelines.

In the Voyager episode “Relativity,” we learn that individuals from competing timelines are reintegrated with alternate versions of themselves all the time. In that episode, a future, time-traveling version of Starfleet operates out of the 29th Century. For all intents and purposes, the version of Starfleet in “Relativity” is like the TVA in Loki: constantly trying to fix branches in the timeline, and nabbing variant versions of people from timelines that are “pruned” back into order.

Notably, the person who helps this TVA-ish Starfleet in “Relativity” is... Seven of Nine! Now, I’m not suggesting that Seven has been recruited by Captain Braxton and the time police of the future again, but the fact that Seven has already made it through several alternate timelines is notable. In addition to both having been assimilated by the Borg, Seven and Picard both have dealt with various alternate timelines before. This episode also established how a person can exist within an altered timeline and be aware of it at the same time — which could explain a lot about Picard Season 2.

Whether or not Picard Season 2 will make a big deal out of all this canon isn’t clear. If the timeline change changes the Romulan supernova, it doesn’t make a ton of sense how it would have impacted Seven getting assimilated as a young child. There are really only two explanations for her Borg implant being absent in the trailer: she’s either in a timeline where she was never assimilated, or she’s in a timeline where her implant was removed.

Discovery’s future could contain a clue

Because Q is taking Jean-Luc through yet another altered timeline, Trek tradition tells us that, by the end of the storyline, everything will be back to normal. Picard vows to get everyone “home” in the trailer, which presumes the old timeline.

But if that doesn’t happen? What if the “broken” timeline that emerges from Picard Season 2 becomes the main Trek timeline, going forward? In between Picard and Discovery Season 3 (and Season 4) we don’t know a ton about what happens to Starfleet and the Federation. Yes, the Federation still exists in 3188, but that’s 789 years after Picard: aka, plenty of time for the Federation to become recognizably the version of itself we see in the 32nd Century.

Discovery Season 3 made it clear that Spock’s work reunifying the Romulans eventually resulted in the totally integrated planet Ni’Var. In the current timeline, Spock would have been absent after 2387, which means he would have only worked on this reunification project for 19 years before being presumed dead.

But if Discovery exists in a future in which Spock never went back in time and didn’t create the Kelvin universe, it stands to reason he would have been on Romulus for longer. His attempts to broker peace there would have been particularly more likely to succeed had Picard been successful at evacuating Romulus.

Discovery acknowledged the existence of the Kelvin Universe for the first time in Season 3, but that doesn’t rule out the series also existing in a (hypothetical) altered timeline that branches out from Picard Season 2.

If Picard Season 2 does retcon Picard Season 1, it might retcon the Kelvin Universe, too. This wouldn’t erase those events, no more than Loki’s wiping out the events of Avengers: Endgame. If the show wants to do something radical with an alternate timeline story, perhaps the best move is to simply move forward after entering such a timeline into a new frontier.