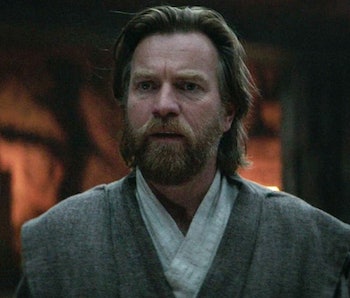 When Obi-Wan Kenobi premiered, fans rejoiced at the opportunity to better know the Jedi master. But that wasn’t the only draw. While Ewan McGregor returned to reprise his role in the prequel trilogy, so did Joel Edgerton and Bonnie Piesse. The actors had relatively small roles as Uncle Owen and Aunt Beru, respectively, in the prequel films, and the Disney+ series gave their characters the space to do more than just foreshadow their eventual, tragic downfall. In Obi-Wan Kenobi, they get to be actual characters, hell-bent on defending a young Luke left in their care.

But did the series accidentally make the Owen and Beru death scene in A New Hope almost needlessly cruel? One fan theory suggests just that.

Redditor Traditional_Hippo976 suggests the new information revealed in Obi-Wan Kenobi means that Obi-Wan allows Aunt Beru and Uncle Owen to perish in A New Hope. In the series, Obi-Wan is tasked with protecting Luke Skywalker. His entire life revolves around it, to the point that Owen tells him he’s getting too close. By the end of the series, Obi-Wan saves Owen and Beru after they fight tooth and nail to keep Luke safe, proving that he can.

Since we know Obi-Wan is capable of saving Luke and his extended family, why didn’t he raise the alarm when he noticed the Empire had tracked down the sale of R2-D2? Why wasn’t he willing to put his own neck on the line this time in order to protect the people whom, like him, have dedicated their lives to keeping Luke safe?

The original Reddit post was removed from the Star Wars Speculation subreddit because it wasn’t speculative enough about Star Wars’ future, but it could have huge effects on what’s to come in the franchise. Does Luke remember Obi-Wan basically sacrificing his aunt and uncle? Does he feel guilty about it?

Now that Luke is starting a Jedi Academy of his own, these are questions he’ll have to reckon with — something we could see in a future season of The Mandalorian. Obi-Wan may have a reputation for being the most noble of Jedi mentors to both Anakin and Luke, but this theory suggests he was willing to accept collateral damage if it meant the “Chosen One” was able to live.

The Jedi famously don’t believe in attachments — did Obi-Wan see Owen and Beru as a possible distraction to Luke’s upbringing as a Jedi? Does this theory highlight an unexpected cold streak in Obi-Wan, a willingness to sacrifice human life for the Jedi he prioritizes over everyone else? And, if so, what does it mean for the past — and future — of this world’s characters?