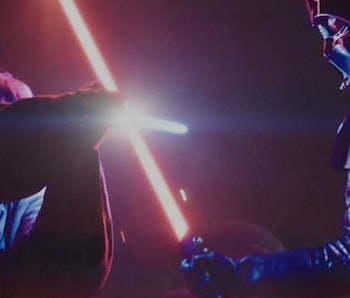 All of Obi-Wan Kenobi was leading up to the ultimate rematch between Anakin Skywalker and his former master. In the series finale, Obi-Wan realized there was no escaping the inevitable, and that Darth Vader would stop at nothing to get his revenge.

But we still don’t know just where this showdown happened. Obi-Wan takes his little escape pod to a nearby planet covered in rocks, and Vader meets him there. So where is this planet? Fans may have figured it out.

Redditor u/TheFelux pointed out that the rocky terrain of this mystery planet looked a lot like the rocks of Malachor V, which once housed a great Sith Temple. Gamers will recognize Malachor V as a location in Knights of the Old Republic II, while newer fans will know Malachor V’s from its appearance in the “Twilight of the Apprentice” episode of Rebels.

There’s a lot of evidence backing this theory. For starters, Jabiim, the Path’s final destination, is an Outer Rim planet just like Malachor, and they seem to both be in the northeastern quadrant of the galaxy. So it’s likely Malachor was simply en route and provided an easy location for the duel.

Malachor is an entire system, so it’s possible this just happened to be another rocky planet in the area. But that seems a bit too coincidental, especially when considering another classic duel between Darth Vader and an old friend.

Malachor V is where Darth Vader dueled Ahsoka Tano in Rebels, meaning he’s got a history with the planet. What are the chances he just happened to be there again? Perhaps the Force somehow pulls Jedi and Sith to it, or perhaps the team behind Obi-Wan just considered it thematically interesting to bring Vader back to the planet.

It’s still possible the duel happened on some random planet, but unless a clear answer is provided fans are free to speculate and assume. There’s really no better option than Malachor V, which fits the bill geologically, geographically, and thematically.

Considering the interconnectedness of the Star Wars TV universe, it’s possible we may get confirmation of the duel’s location in Ahsoka Tano’s upcoming spinoff. Ahsoka is speculated to include the World Between Worlds, which is a timey-wimey sub-dimension Ahsoka escaped to after her duel with Vader. So if you want the answer, you’ll have to keep watching Star Wars.