“I may not have seen much, cousin, but I can see that.” 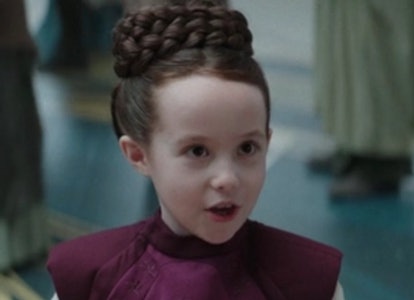 The introduction of Vivien Lyra Blair as young Leia Organa in Obi-Wan Kenobi threw fans for a loop. We knew Ben Kenobi as the man who guided Luke on his journey to becoming the hero who rescued Princess Leia, but so far this series has focused on his relationship with Leia instead. In doing so, it’s introduced an entirely new side to both his character and hers, and it’s touched on a secret that won’t come to light until decades later in her life.

Much of the appeal of young Leia’s character is her sassiness. From her fakeout in what was supposed to be her introduction to her pickpocketing L0-LA from her mother’s robes, she didn’t grow into the role of a rebel princess — she was born one.

Her most savage moment comes after she’s dragged into a diplomatic reception. She’s trapped in a conversation with her cousin, who calls her out for not being “a real Organa.” Her response is cutting, and insightful for a 10-year-old.

You're scared of him. Your father. You want him to like you, so you repeat what he says even though you don't really know what it means. You think being like him will make people frightened of you, but really, you're the one who's scared. You've never made one decision for yourself in your entire life, and you never will.

But is she really just that emotionally aware, or could there be something more at work here? Leia’s insight may be a result of her latent Force sensitivity.

That sensitivity isn’t revealed until The Last Jedi, but this series could be the perfect explanation for how she discovered her powers, and why she kept them hidden until later. While Luke’s power was physically strong, in A New Hope he’s emotionally still a teenager for much of the film.

Leia, on the other hand, may not be able to make things float, but she’s wise beyond her years. Even Obi-Wan remarks that she “doesn’t talk like she’s 10” in Episode 2. Her Force powers may manifest themselves in her empathy, allowing almost telepathic insight into those around her. It would explain her takedown of her cousin, and her suspicion of everything Obi-Wan says.

But while Episode 1 and 2 may have teased these powers, Episode 3 gives Leia the clues that this may not just be leadership skills inherited from her mother, but Force powers inherited from her father. When she asks Obi-Wan what the Force is like, he compares it to the safe feeling she feels when she turns on a light in a dark room.

We know Leia will eventually become aware of her powers, and this description may be the confirmation she needs to get the gears turning. If she can feel the Force flowing through her, it could provide a sense of safety that keeps her cool as she’s kidnapped and stuck on a transport with Stormtroopers.

But if Leia was Force-sensitive from the get-go, why don’t we see her use her powers in the many years before the sequel trilogy? As powerful as her Force abilities may be, keeping them secret may have given her even more of an edge. Or maybe we’ll see her start to use her powers in Obi-Wan Kenobi under the former master’s tutelage before they put her in danger, forcing Leia back into hiding while forcing Obi-Wan to reckon with just how difficult keeping the Skywalker twins from their destiny truly is.