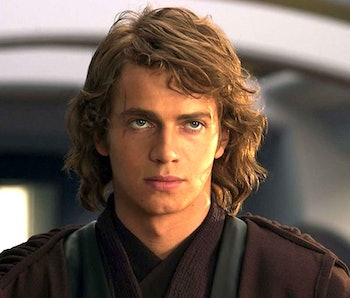 Palpatine is the throughline of Star Wars. Just when you think he’s gone, he comes back in a way that completely redefines who you thought he was. He’s the shadowy villain in the original trilogy, the quietly scheming Sheev in the prequels, and somehow, Rey’s grandfather in the sequels.

But there’s one role he may or may not have: Anakin’s “father.” Obi-Wan Kenobi could be the perfect opportunity to include this forgotten lore — and solve a decades-old mystery.

Usually, when discussing non-canon elements of Star Wars, we’re talking about the pre-Disney Legends continuity, containing countless books, comics, and video games. This element is an exception to this long-standing rule. We don’t have to look decades in the past to see Palpatine’s influence on Anakin’s birth; we only have to look back to 2018.

In December 2018, Darth Vader #25 provided a shocking conclusion to the wildly popular Vader run of comics. It opens with Anakin entering a dream-like state outside of his suit where he sees a vision that implies Palpatine influenced the conception of Shmi Skywalker through the Force.

At face value, it certainly looks like this means Palpatine is Anakin’s father. After all, Shmi’s unaware of how she ended up pregnant. But the Lucasfilm Story Group executives de-canonized this after publication, claiming the vision was just through Anakin’s point of view and not a reflection of what really happened.

But the question remains — if Anakin was truly a virgin birth, what caused it? Was it the concept of the Force in general, or a Force user intentionally creating The Chosen One? Obi-Wan Kenobi is uniquely positioned to answer this question.

One of the huge appeals of the upcoming prequel series is the return of Hayden Christensen playing Darth Vader. Incorporating the actor who played Anakin is only really valuable if we see him outside of the suit, and this comic is one of the few instances where we see a post-Mustafar Anakin without his iconic helmet and cape.

Whether through a dream sequence or flashback, Obi-Wan Kenobi could not only answer the strange question of Anakin’s origin but find a way to introduce Palpatine to the Star Wars television universe, the only part of live-action Star Wars not to include him. It would really take out two womp rats with one stone.

Obi-Wan Kenobi premieres May 25 on Disney+.