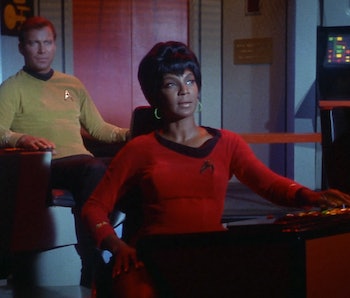 The incomparable actress, singer, mother, and activist Nichelle Nichols passed away at the age of 89 on July 30, 2022. Her legacy will largely be centered on two facts:

As an inspiration to Martin Luther King Jr., President Barack Obama, Stacey Abrams, and countless millions, Nichols will always be remembered for a beloved character she essentially created from scratch. Here are five brilliant Uhura moments from across the Star Trek franchise that establish why Nichols and her Starfleet alter-ego were — and still are — so influential almost six decades later.

Although countless retrospectives will doubtlessly focus on Nichols and William Shatner participating in the first interracial kiss on American television in the episode “Plato’s Stepchildren,” that scene is not in any way, shape, or form representative of one of the greatest Uhura moments in the original Star Trek. Visually, it may have been groundbreaking, but since the context of that scene was Kirk and Uhura being forced to kiss each other by alien “gods,” it’s hard to make the case that it’s all that progressive.

Instead, if you want an amazing jolt at just how groundbreaking Uhura was on Star Trek, look no further than the very first aired episode ever, “The Man Trap.” In it, the series casually establishes that Uhura speaks Swahili, and does so when she meets a man who also speaks the African language. White American TV audiences were certainly not used to seeing two Black characters speak in an African language on prime-time TV, making this moment wonderful, partly because of its confidence. Even early in her Trek appearance, Uhura proved that representation matters.

As an action-adventure character, Uhura didn’t get as many kick-ass moments in The Original Series as fans probably would have liked. But when it came time for Star Trek III: The Search For Spock (1984), Leonard Nimoy made it his goal to make sure every crew member had a chance to shine.

This led to a hilarious and badass scene in which Uhura tells a younger subordinate exactly where he can stick it. When he asks, “Have you lost your sense of reality?” Uhura responds, “This isn’t reality, this is fantasy!”

The classic episode “Balance of Terror” — recently recreated on Strange New Worlds — is famous for many things. It introduced the Romulans. It had a fantastic plot involving Spock facing bigotry from fellow Enterprise crew members. It’s just a wonderful piece of science fiction suspense. But one small moment is sometimes overlooked.

When navigator Stiles (Paul Comi) heads to the phaser control room, Uhura assumes the forward-facing position at the navigation station next to Sulu at the helm. It’s one of the rare moments Uhura is up in front flying the ship. Symbolically, it’s awesome. Star Trek didn’t make a big deal about Uhura being a polymath, capable of various jobs on the Enterprise. It just happened.

2. Uhura and Spock rock out

Although Spock takes a lot of grief from Bones (DeForest Kelley) throughout the run of the original Star Trek, the one person who can tease Spock without insulting him outright is Uhura. The earliest moments of “The Man Trap” establish Spock and Uhura’s playful and respectful relationship, but it’s in the episode “Charlie X” where we see how much these two characters like and respect each other.

When Uhura starts singing a song about Spock in which she compares him to “someone in Satan’s guise,” Spock isn’t offended. He goes along with Uhura’s song because he thinks she’s great, proving that these two get each other. Both Nichols and Nimoy said numerous times that they considered Spock and Uhura to be kindred spirits and, as such, supported each other both professionally but also as friends.

Written by John D.F. Black, the episode “The Naked Time” is a classic Trek romp. When the Enterprise crew catches a virus that causes everyone to lose their inhibitions, Spock ends up crying, Riley (Bruce Hyde) starts broadcasting love songs over the intercom, and Sulu (George Takei) takes off his shirt and starts running around with a sword.

When the crazed Sulu enters the bridge, believing himself to be some kind of swashbuckler, he grabs Uhur and says, “I’ll protect you, fair maiden.”

Uhura’s response hits back against racism and sexism at the same time. She says, “Sorry, neither!” Her skin is neither fair nor is she a defenseless maiden. It’s a quick line, contained in an over-the-top scene in an equally hyperbolic episode. But it’s these small, profound moments that made the original Star Trek so groundbreaking — and make Uhura the most essential member of the Enterprise’s thoughtful and forward-thinking family.

You can watch the excellent Nichelle Nichols documentary Woman In Motion on Paramount+.