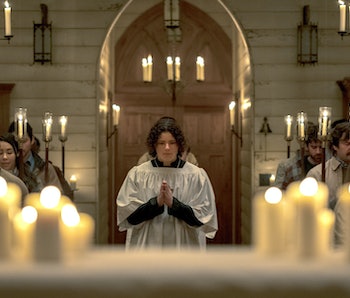 Midnight Mass draws inspiration from plenty of real-life elements. Faith, doubt, addiction, guilt, and the effects of incarceration are all explored in Mike Flanagan’s new series.

But what’s not as clear are the real-life inspirations that affected the show’s otherworldly final acts. Though the show may feel incredibly new and original, many elements are pulled from our world.

From the Catholic doctrine behind Father Paul’s actions to the tragic real-life massacre St. Patrick’s used as inspiration, here are all the little details in Midnight Mass you may have missed.

Transubstantiation is a big word, but it’s the key to understanding how Father Paul would so readily accept the Angel’s plan to slowly feed its vampiric blood to the church’s congregants.

Basically, transubstantiation is the Catholic belief that the bread and wine are literally transformed into the body and blood of Jesus Christ during mass, as opposed to serving as a symbol for Christ’s body and blood.

Since Catholics believe they are literally drinking the blood of Christ, which has the appearance of wine, it explains why Father Paul would be so open to feeding his parishioners the blood of The Angel. He truly believes it’s not much different from what’s usually given out at mass.

As the congregants turned vampires realize their fate is doomed after Ali burns down the rec center, they come to terms with their demise while waiting for the sunset. (Like traditional vampire lore, sunlight kills them.) Mrs. Flynn starts singing a hymn, “Nearer My God to Thee,” and the rest of the surviving Crockett Island population joins in.

Though hymns factor into Midnight Mass all the time, this one holds another meaning. Supposedly, “Nearer My God to Thee” was the last song performed by the band on the Titanic as it sank. In reality, this may or may not be true and could be influenced by a similar situation where stranded passengers sang the hymn while onboard the SS Valencia as it sank in 1906.

Regardless, the song, which tells the story of Jacob dreaming of a ladder to heaven, is synonymous with accepting death not as a final act but as a transition to the afterlife.

Comparing the Catholic Church in Midnight Mass to a cult is a tricky subject, but there’s one huge parallel: The tragic events at Jonestown closely resemble the Easter Vigil mass at St. Patrick’s Church.

A remote village in the South American country of Guyana, Jonestown was run as a commune-like community by cult leader Jim Jones. On November 18, 1978, a massive murder-suicide led to 909 people dying.

Jonestown is the origin of the term “drink the Kool-aid,” in relation to people buying into cult belief systems, as those who died by suicide did so with a Kool-aid-like drink dosed with lethal drugs. Although many believe the Jonestown deaths were all suicides, eyewitness accounts insist guards were ordered to shoot any members who attempted to flee, and many of those who died were children who were fed the poison. Because of this, Jonestown is usually referred to as a massacre nowadays.

In Midnight Mass, however, almost all the churchgoers willingly take the poison, thanks to the supposed resurrection of other congregants. After weeks of drinking vampiric blood, the offered rat poison killed and resurrected the congregants as vampires. Unfortunately, Crockett Island meets the same fate as Jonestown. The surviving humans burn down all shelter on the island, so when the sun rises the next morning, the vampires meet their end.

It’s a harrowing but fitting ending for the horror series, which proves to use its real-life inspirations to tell a twisted and unnerving story that challenges our beliefs.

More like this
Entertainment
8.9.2022 1:00 PM
Has your favorite HBO Max show been canceled? The fate of 9 sci-fi series revealed
By Robin Bea
Culture
8.9.2022 10:00 AM
The Sandman: 11 characters pulled from DC comics history
By Robin Bea
Entertainment
8.5.2022 7:00 AM
The Sandman is Netflix’s first great comic book adaptation
By Mónica Marie Zorrilla
Related Tags
Share: