“That’s not how the Force works!” 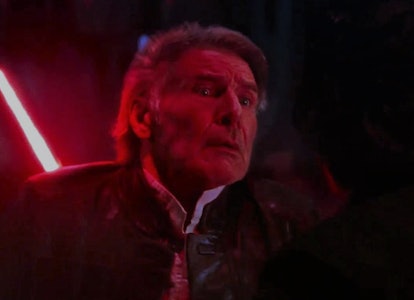 When Han Solo died in December of 2015, people freaked out. Even though countless Star Wars fans were oddly expecting Solo to die in The Force Awakens, watching it happen was something else. Not only did Han die, he seemingly died for no reason, and then, his dead body was dropped into a pit, and, just to make it clear, the whole planet was destroyed.

Back in the innocent days of new Star Wars discourse, Han’s death felt edgy and maybe even necessary. But a couple of years after J.J. Abrams returned to wrap up the sequel trilogy (and bring back Harrison Ford one more time), the death of everyone’s favorite space pirate feels less than daring.

Recently, quotes from Marcia Lucas, the editor of the very first Star Wars film ever, have caused a stir. But, you don’t have to agree with everything she said to meet halfway about Han Solo. Here’s why Marcia Lucas has a point about the weirdest death in all of Star Wars.

What did Marcia Lucas say about the Star Wars sequels?

Interviewed by the late J.W. Rinzler for the forthcoming book Howard Kazanjian: A Producer's Life — for which she also wrote the forward — Marcia Lucas had less than stellar things to say about all Star Wars films beyond the original trilogy. In various excerpts of the interview, she admitted she “cried” after she saw The Phantom Menace because she thought it was “not good.” She also complained that Rey’s story is less than fulfilling because “we don’t know how she got Jedi powers,” and largely, she felt the sequel trilogy “sucks.”

But, perhaps the rowdiest comments are about the death of the various beloved characters from the classic trilogy, specifically the death of Han Solo:

Now, it’s been well documented that Harrison Ford wanted Han Solo killed off way before The Force Awakens, which certainly influenced the screenplay for that movie. Also, Marcia Lucas isn’t 100 percent correct about J.J. Abrams writing “these stories.” After Michael Arndt’s take, The Force Awakens screenplay was co-written by Abrams and Lawerence Kasdan, the latter of whom wrote Raiders of the Lost Ark and The Empire Strikes Back. So, it’s not like the death of Han Solo came out of nowhere. At least one original trilogy star wanted it (Ford) and at least one original trilogy writer (Kasdan) co-wrote the screenplay in which it happened. Han Solo’s death is not just the random whim of J.J. Abrams. And yet, did it actually work?

The case for Han Solo not dying in Force Awakens

Putting aside Lucas’ strange comments on Rey’s story (which does fulfill the Campbellian Hero’s Journey), the narrative power of Han Solo’s death is dubious. Throughout the sequel trilogy, Han’s death serves as a kind lesson to Ben Solo, but for what exactly? Don’t kill your parents? Don’t blame your temper tantrums on your Uncle Luke? In The Force Awakens, it is implied Han Solo was a bad and absent father, and therefore, is at least partially responsible for Ben’s transformation into Kylo Ren. However, because Han dies in that film, subsequent sequels never explore the implications of this. We never see Han Solo living with a mixture of guilt, shame, and love for his son. Sure, Han’s “ghost” comes back and forgives Ben in The Rise of Skywalker, but that hardly feels like growth or character development.

By making the biggest new villain of Star Wars the son of one of its most beloved heroes, the sequel trilogy seemed to present a much more emotionally complex problem than the previous films. How could the Resistance take Han and Leia seriously with the knowledge that the enforcer of the First Order was their own son? True, some Star Wars stories have addressed the Republic’s frustration with Leia, relative to her connection to Darth Vader, but that mostly happened in novels like Bloodline. Onscreen, the Skywalker-Solo family doesn’t really grapple with much. Han looks sad about having an evil son, gives Leia a hug, and then dies.

Onscreen, Ford sells all of this wonderfully. But on paper, it’s a bit hollow. When you look at the entire sequel trilogy, Han’s death simply happens in order for Rey and Finn to become the “new main characters.” It’s a superficial story beat designed to evoke the death of Obi-Wan Kenobi in A New Hope. But imagine a sequel trilogy in which Han, an older man who had made mistakes, is forced to live with those mistakes.

The journey of Han Solo in the original trilogy was about an ordinary person — not a Jedi — who made questionable decisions and sometimes rose above his worst impulses. In The Force Awakens, Han became a checkmark, presumably allowing the younger characters to “take over.” This kind of agism in Star Wars is unsubtle and common. Killing Han Solo got an “old” character out of the way, but it didn’t say anything new or interesting about his journey. The Han we met in The Force Awakens had essentially reverted to a slightly worse version of himself before A New Hope. He owed people money. He was doing illegal things to make ends meet. He was avoiding living a real life. In theory, the film redeems Han (again) because he sacrifices it all to help a good cause.

But what did Han’s sacrifice mean? Did he delay Kylo Ren? Did he really distract the First Order? Did he die a hero? The answer to all these questions is not really, no, and certainly not. And for that reason, Marcia Lucas saying the movie didn’t “get” Han or Star Wars isn’t that far off. From a certain point of view, on this one point, she may have revealed not just what was wrong with The Force Awakens, but The Rise of Skywalker, too.

Howard Kazanjian: A Producer's Life is out now.