“The boy comes with us” 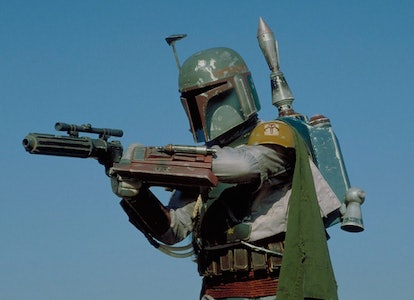 Din Djarin and Boba Fett have finally made amends. After a brief altercation, the two were on good terms by the end of The Mandalorian Season 2. Boba even offered to give Din a ride and helped him find Grogu after Moff Gideon pulled off a kidnapping. But change is in the air.

It’s Boba’s turn in the spotlight with his own spinoff, The Book of Boba Fett, premiering in just a few weeks. Could the series set up a shocking Mandalorian Season 3 villain? The depths of Star Wars canon suggest just that. Here’s how.

Star Wars canon is full of information about Jango and Boba Fett, but The Mandalorian introduced an entirely new chapter in their history. After Boba is reunited with his father’s armor in Season 3, he shows Din the chain code embedded into it. A translation of the symbols revealed a reference to Jaster Mereel, bringing one of the most interesting Mandalorian characters into canon.

Because he’s the (cloned) son of the (adopted) son of Jaster Mereel, Boba Fett technically also has a claim to the Mandalorian throne. Perhaps as he develops his crime empire in The Book of Boba Fett, he could learn of his rich heritage and seek to take what’s his.

After all, Boba survived the Sarlacc, years on Tatooine, and a confrontation with the Empire. Of all the Mandalorians, be they pureblood or Foundling, Boba’s been through the most and has the experience necessary to lead the Mandalorians into a new era. He’s famously the son of a simple man making his way through the universe, so he’s the perfect man to lead a scattered population of equally simple people just getting through life. (The only problem? Everyone in the galaxy hates him for looking and sounding identical to the Empire’s Clone Troopers.)

The Book of Boba Fett premieres December 29 on Disney+.