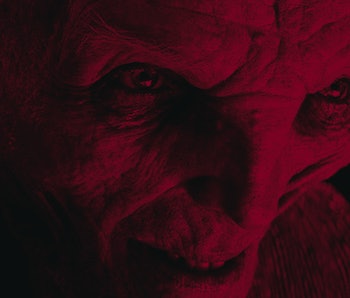 In a sea of muddled storytelling, confusing reveals, and weird plot twists, there’s one strange moment in The Rise of Skywalker that actually did what it was intended to. In the first shots of Palpatine’s throne room on the planet Exegol, a simple pan across a tank revealed what looked to be replicas of Supreme Leader Snoke swimming in Sith brine.

It’s a simple but effective moment of atmospheric storytelling that hints at how Snoke was created — a question Star Wars would continue to hint at in The Mandalorian Season 2.

But the question remains: how did this cloning technology begin? Concept art from the latest episode of Star Wars: The Bad Batch hints at what a future Mandalorian episode could explore.

The latest episode of The Bad Batch, “Bounty Lost,” follows Jango Fett clone Omega, now in the custody of infamous space cowboy bounty hunter Cad Bane. He brings her to Bora Vio to be traded back to the Kaminoans who raised her. (Bora Vio was the home of an abandoned cloning facility, presumably before the process moved to the “deleted” planet of Kamino.)

While on that planet, Omega comes face to face with tanks full of rejected cloning experiments. The tank is too cloudy to see the creatures in detail, but concept art from the episode reveals some truly gruesome Eldritch horrors of cloning experiments gone wrong.

These creatures mark the third time we’ve seen cloning “rejects,” and it doesn’t feel like a coincidence. The most logical conclusion for all this foreshadowing is a “reject” posing a threat in a future episode of The Mandalorian. After all, the reason the Empire wanted Grogu in the first place in order to experiment with cloning.

That initial motivation was soon cast aside thanks to the Darksaber, but with Mando now in possession of the mythical weapon, it’s time for a reminder of The Mandalorian mysterious roots.

And now that Moff Gideon’s Dark Troopers are destroyed, could his next weapon turn out to be some sort of terrifying clone? Are we about to see an army of Snokes in The Mandalorian Season 3?

The creatures in the concept art may be a bit too horror-inspired for the more children-focused Bad Batch, but for The Mandalorian, it would be another opportunity to show off the incredible special (or practical) effects used to create complex creatures in live-action.

This addition would also finally answer fan questions about the birth of the Star Wars cloning technology. Was Snoke a byproduct of the technology used to create Palpatine’s clone army What were the first creatures the Kaminoans ever cloned? Why are they being preserved on Bora Vio, especially if they are not meant to be revived at a later date?

Din Djarin could be the one to discover the answers to these questions — hopefully in The Mandalorian Season 3.

Star Wars: The Bad Batch is now streaming on Disney+.