“You know every grain of sand in the Dune Sea” 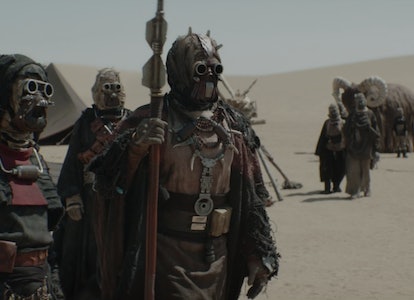 The Dune Sea has always been part of the Star Wars landscape. From Luke climbing dunes to stare at the suns set in A New Hope all the way to Boba Fett declaring himself Daimyo after emerging from the sands on a Bantha, the desert is as familiar as any spaceship. But how did they come about?

In The Book of Boba Fett Episode 2, we learned that the Dune Sea used to actually be a sea. But that doesn’t explain how the Tuskens and Jawas became distinct tribes equipped for the desert lifestyle. Thankfully, the answer lies in Star Wars Legends, and it could become the key to The Mandalorian Season 3.

According to the non-canon comic Dawn of the Jedi: Force Storm, Tatooine used to be a lush and diverse planet complete with seas and jungles. The native people, the Kumumgah, were defeated by the colonizing Rakata. However, according to lore in Knights of the Old Republic, the Kumumgah rebelled, forcing the Rakata to bomb Tatooine and render the planet into little more than glass.

Over time, that glass crumbled into the sands that make up the Dune Sea, and the Kumumgah were divided into two subgroups that adapted to the dry climate in different ways. These groups became the Tuskens and the Jawas.

With the fact that Tatooine once contained water confirmed in The Book of Boba Fett, the rest of this old lore could be grandfathered in. But how could it be implemented into the current Star Wars canon? The answer has to be bigger than The Book of Boba Fett’s limited scope. For such an integral origin story, the source can’t be a measly spinoff series. A flagship show is the best bet.

If The Mandalorian Season 3 brings Mando back to Tatooine for another adventure with the Tuskens, there could be a prime opportunity to explain their origin story.

Not only would this shed much-needed history on ancient Tatooine, but the climate crisis turning a lush planet into a desert wasteland is an allegory Star Wars would be foolish to pass up.

Showing how a planet’s inhabitants can go from peaceful to “savage” through climate change and colonization is a lesson that’s all over classic sci-fi. It’s about time it was brought to Star Wars.