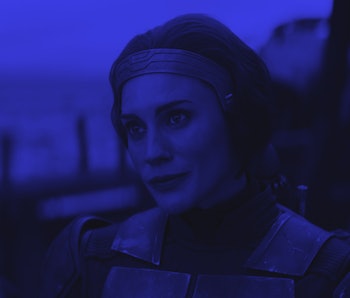 Star Wars fans settled in for a long wait after The Mandalorian Season 2.

A post-credits scene revealed that the series’ upcoming spinoff The Book of Boba Fett would premiere on Disney+ this year, not leaving much room for another Mandalorian season until next year. Then, Pedro Pascal was cast in HBO’s video-game adaptation The Last of Us, filling up his schedule and delaying The Mandalorian filming even more.

Amid a cameo-stacked Season 2, The Mandalorian introduced sci-fi icon Katee Sackhoff as Bo-Katan Kryze, reprising her role from Star Wars: The Clone Wars and Star Wars: Rebels. At the end of the season, Din Djarin became the rightful owner of the Darksaber. Bo-Katan — who’d tracked Moff Gideon down just to claim the blade as her own — obviously has unfinished business, which will have to be addressed in Season 3.

But recently, Redditor spacejunkunion reported that Sackhoff had posted a (now-expired) Instagram story of the actress on her way to get a Covid-19 test she had written she needed in order to get back to work, leading many to believe she’s about to don the famous ginger bob again for The Mandalorian Season 3.

Figuring out when The Mandalorian is filming has been unusually difficult for fans. Unlike countless other series, it’s mainly filmed in an enclosed set, meaning very few location shoots exist where curious fans can steal a peek at the action.

On top of that, specific plot details about The Mandalorian add another layer of mystery to the production. Because of Din Djarin’s Mandalorian upbringing, he never takes off his helmet — unless Grogu’s fate is on the line. Hypothetically, the filmmakers might not even need Pedro Pascal to be on set in person in order to some Din Djarin scenes. It’s this fact that fueled all those bogus “Pedro Pascal quits!” theories last year, but it could mean filming on Season 3 is happening even as Pascal is still filming on The Last of Us.

Could this mean we’ll get The Mandalorian Season 3 sooner than expected? Well, hopefully. But just as a chain is only as strong as its weakest leak, a production can only move as fast as its biggest obstacle will allow it to, and that obstacle in this case is The Last of Us filming being slated to end in June 2022. That’s quite a while to wait, but the idea of The Mandlorian hopefully getting back to work and starting to film means they’re just as eager to revisit that story as we are.