“When our leader falls in battle, the most worthy takes his place” 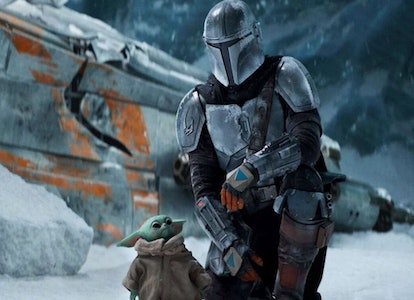 Din Djarin is going through changes. In Season 1, he was a bounty hunter first and foremost, working within the Guild on various assignments. In Season 2, he added the title of “Adoptive Dad” to his intergalactic resume, looking after Grogu and trying to reconnect him with more of his kind.

But by the end of Season 2, Din handed off his tiny clanmate to Luke Skywalker and, through battle with Moff Gideon, became the rightful owner of the Darksaber — and therefore the leader of the Mandalorians.

This latest role has a long history within the non-canon Legends lore, a history that could be explored in The Mandalorian Season 3 through flashback. Here’s what you need to know.

This tradition goes all the way back to Mandalore the First, a mythic figure who led the Taung people to a new planet and renamed them Mandalorians. It’s confusing, but the Mandalore is not named after the Mandalorian people. It’s the other way around.

While the Darksaber does not exist within Legends canon (at least, not in the same way it does in the series), one artifact was historically passed down from Mandalore to Mandalore: a mask. This mask was worn by Mandalore the First, then Mandalore the Conqueror, Mandalore the Indomitable, and so on.

As Mandalorian Season 3 takes on the task of explaining the long line of Mandalores in history, this presents a prime opportunity for a flashback, much like the flashback we got explaining Din’s rescue as a young child. But which Mandalore is most likely to appear in a flashback?

If the series wants to flash back thousands of years, it could establish how the Mandalorian people got their name to begin with, thanks to Mandalore the First. But there’s another possibility. In Season 2, Boba Fett showed his armor’s chain code to Din. Decoded, the code explains that Jango Fett was himself a foundling rescued by Jaster Mereel.