“There’s nothing to overthrow.” 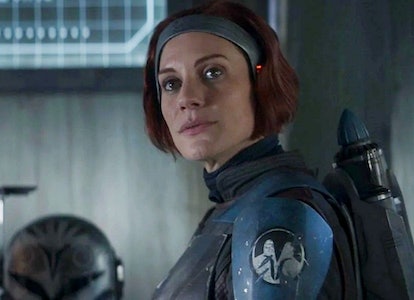 The Mandalorian’s biggest threat isn’t the Sith. It isn’t even the Empire.

In the wake of its second season, the biggest threat to Din Djarin — now his son Grogu has been picked up for Jedi training by Luke — is none other than a fellow Mandalorian. That said, neither Din nor his adversary considers one another a real Mandalorian.

That’s right: Bo-Katan Kryze is the newest threat to Mando’s livelihood, now that he rightfully bears the Darksaber.

To Bo-Katan, that weapon is her birthright, and the only thing standing between her and what she deserves is Din Djarin.

Surprisingly, this conflict parallels a non-canon Mandalorian war, one that involves some exceedingly familiar faces.

This Mandalorian Civil War began with Jaster Mereel’s True Mandalorians, who thought the Mandalorian creed was more occupation than identity, believing they should serve as honorable mercenaries. They clashed with the Death Watch, led by Tor Viszla, who believed the Mandalorians should be the merciless savages they originally were.

Din Djarin and Bo-Kata are heading for a similar ideological conflict. Din Djarin is a Foundling, a practice started by the True Mandalorians, while Bo-Katan is a former member of the Death Watch, one who later broke off and founded the Nite Owls. But there’s an even closer connection between these events.

This Mandalorian Civil War was introduced into Star Wars: Legends through flashbacks in Jango Fett: Open Seasons. In these comics, it’s revealed Jango Fett was also a Foundling, from Concord Dawn, and was brought into Mandalorian culture by Jaster Mereel.

Jango’s origins may appear a strange inspiration for The Mandalorian, but there are already ties between this backstory and the series, despite Mando taking place decades later. In The Mandalorian Season 2, Boba Fett got his armor back from Cobb Vanth (via Din) and showed him the chain code embedded in the armor. Translated, the code reads “Jaster Mereel.”