‘Mandalorian’ Season 3 could change everything with this deadly twist

“I am here for a single, specific purpose.” 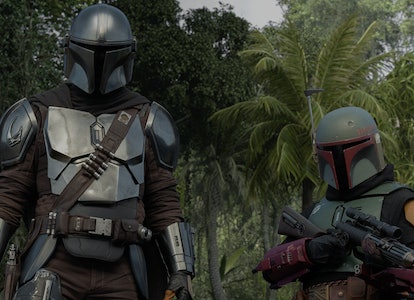 The Mandalorian Season 2 introduced plenty of mysteries. After a season of following Din Djarin, who strictly follows his own Mandalorian “Way,” it was revealed in Chapter 11, “The Heiress,” that Din isn’t your typical Mandalorian. In fact, he’s part of an ultra-orthodox sect of Mandalorians referred to by Bo-Katan Kryze as the “Children of the Watch.”

But, for now, Din Djarin is the only one of this sect we’ve seen aside from a hazy image in a flashback. So how could The Mandalorian introduce more of these Children? The answer lies outside of Star Wars canon, involving a civil war, a militia, and that weird flashback.

Before the Children of the Watch reveal, fans assumed Din Djarin was rescued by the Death Watch. In the flashback of his rescue by a Mandalorian squad, the soldier that took him to safety bore a Death Watch logo on their armor.

However, in the Star Wars Legends canon, another Mandalorian group could fill this role. What’s more, it could explain why Din Djarin was rescued by a member of the Death Watch despite Bo-Katan, a former Death Watch member, disapproving of rescuing such foundlings.

Here’s why this group is tailor made for The Mandalorian. First, they were modeled after Jaster Mereel’s True Mandalorians, the group that adopted Jango Fett into Mandalorian society. If the Protectors practiced this, they could be the real “Children of the Watch” sect.

Unfortunately, the Protectors were more or less wiped out at the end of the Clone Wars, apart from three soldiers — Fenn Shysa, Tobbi Dala, and a clone trooper known as Spar. When those three died out, the leader of the reformed Mandalorian Protectors was none other than Boba Fett. In canon, Boba’s a little busy helming his own criminal network and spinoff series, so Din Djarin could easily fill that role.

The Children of the Watch are just another mysterious faction of Mandalorian soldiers. But developing them — perhaps based on the Mandalorian Protectors — would both introduce a new group of deadly supercommandos and reveal more about the people who raised Din Djarin.