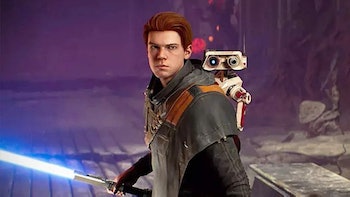 There’s more to the Star Wars galaxy than the movies and TV shows. The rich world of Star Wars books, comics, and video games contains countless characters and stories, and they’re all possible additions to the franchise’s mainstream storylines. Probably the most ripe for inclusion? Cal Kestis, the protagonist of Jedi: Fallen Order.

Cal’s motion-capture actor, Cameron Monaghan, recently hinted at a live-action appearance. But how could the character factor into Star Wars? A comic may just hold the answer.

In an interview with Screen Rant, Monaghan neither confirmed nor denied a possible live-action reprisal of Cal Kestis, but what little he did say suggests he has additional information: “Well of course there's interest. That's about all I can say. [Laughs]”

With a Jedi: Fallen Order sequel entitled Jedi: Survivor on the way, Star Wars could be ramping up for a live-action Cal appearance, something Monaghan would likely be sworn to secrecy about.

If Cal does appear in live-action Star Wars, there is a logical setting for the Jedi. One of Star Wars Legends’ recurring plots is Luke’s formation of a Jedi Academy, often referred to as the Jedi Praxeum. The institution appeared in books, comics, and even the video game Jedi Knight: Jedi Academy. Usually, the academy takes the form of a school on Yavin 4, where Luke Skywalker trained a number of Jedi Younglings including a young Jaina and Jacen Solo.

While that narrative now lies within the non-canonical parts of Star Wars history, there’s a close parallel for the story in canon: the Jedi academy where Luke trains, and is ultimately betrayed by, a young Ben Solo. This part of Luke’s life is slowly becoming more and more important, as we saw it in the Luke-focused episode of The Book of Boba Fett.

How does this all connect to Cal? Well, his droid BD-1 (or at least, another droid of the same kind) appeared in the aforementioned The Book of Boba Fett. Past that, Jedi: Fallen Order centered around Cal’s contemplation to form a Jedi academy of his own. He eventually decides against it, but Luke’s Jedi Academy would allow him to assist in training new Jedi without the guilt of putting children in danger himself.

Where could this huge return happen? If Cal does make the jump, it could happen in The Mandalorian Season 3 or Ahsoka, though both of those shows' timelines would require some aging of Cameron Monaghan. But if aging down Mark Hamill is no big deal, aging up another actor shouldn’t be an issue.