“Risk has always been an inescapable part of warfare” 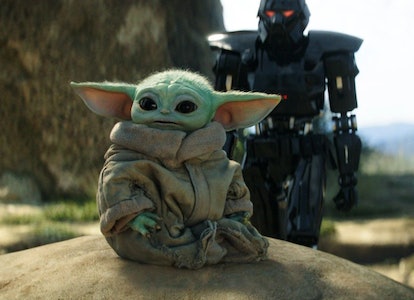 At its core, The Mandalorian is simple enough. It’s a show where a stranger walks into town and helps someone in need — and it just so happens those someones in need live in a galaxy far, far away from us.

The Mandalorian existing mostly outside of the Jedi, Sith, Rebel and Empire conflicts is a huge part of why the show resonates with even the most skeptical Star Wars fans. But after the Luke Skywalker reveal, everything’s on the table for how The Mandalorian might intersect with the greater canon — and in fact, there’s one way the series could take a beloved storyline from the non-canon Legends novels, and use it to shift Star Wars forever.

In a compelling Reddit post from user u/kammzammzmz, an argument is put forward that The Mandalorian actually fits better into the context of Legends than the Star Wars canon. This theory recontextualizes The Mandalorian as a prequel of sorts, taking place in the years before the Thrawn trilogy, Timothy Zahn’s acclaimed series of non-canon novels following the years after Return of the Jedi.

According to the theory, Moff Gideon is just a precursor to Chiss strategist Thrawn’s master plan to create Force-sensitive clones without them going insane. Much like Palpatine cloning himself but suffering some major physical deformities, in the novels, Thrawn attempts to clone Jedi but is left with insane and hostile beings like Joruus C’baoth and failed Luke Skywalker clone Luuke.

Thrawn is probably the best example of Clone Wars, Rebels, and Mandalorian showrunner Dave Filoni adopting aspects of Legends into canon. While he was known as Legends’ best villain for a long time, a fateful appearance in Rebels adopted him into canon forever, leading to Ahsoka’s huge reveal in The Mandalorian that she was looking for him herself.

Since we know Thrawn is out there in the greater Star Wars universe, and since we know he in the original source material was hooked into clone technology, it stands to reason that future stories featuring Thrawn will similarly deal with clones. And it just so happens there’s a baby Jedi-in-training out there whose blood has been the object of Imperial forces’ affections, lately.

Put more directly: Thrawn could seek out Grogu’s blood for cloning purposes, setting up a new Thrawn trilogy of sorts.

There’s much more to the Thrawn trilogy than just the film characters’ involvement. We could see Moff Gideon conspiring with Thrawn, Ahsoka finally coming face to face with the man who posed such a threat against her and her allies during Rebels, or perhaps even Thrawn capturing Grogu himself and enacting a cloning plan beyond the proto-Snokes we saw in Season 2. If you want a job done right, do it yourself.

The Mandalorian is doing a lot to revolutionize Star Wars as we know it, through being a critically acclaimed live-action television show, to the casting, to the storylines. Though portraying a live-action Thrawn may seem a huge jump, it’s merely the next logical line in a forever-innovating fanbase.

The Mandalorian is streaming on Disney+.