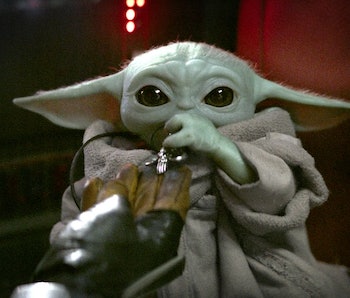 Every Star Wars property needs an over-the-top villain, and usually that role is occupied by a grand Imperial overlord like Darth Vader, Emperor Palpatine, or the Empire as a whole. However, The Mandalorian is set after the fall of the Empire, so its villain is a bit more mundane — Moff Gideon, leader of an Empire remnant seeking Baby Yoda for malicious experimentation.

However, a new theory suggests his quest to capture The Child may be a lot more personal than we realized before this point. Let's dive in.

A theory by Redditor Synth_01010011 suggests Moff Gideon and Grogu actually have a long history. After all, they're about the same age, so Moff Gideon would have been a part of the Republic way back in the prequel era. He may have merely heard of a Jedi Padawan similar to Yoda, or perhaps the two have crossed paths before on Coruscant. The theory suggests Moff Gideon had prior knowledge of Grogu, and actually rescued him the little green spud from Order 66.

It does seem like quite a stretch, but The Mandalorian hasn't shown us anything contradicting it just yet. Moff Gideon's past before the rise of the Empire remains a mystery — he very well have been working with the Republic until the Empire rose up and changed his beliefs. If he in fact saved Grogu from Order 66, this means he would know truly how powerful the tiny Force user could be for his own nefarious purposes much later.

This would explain both why Grogu's memories of the stretch of time after Order 66 are so hazy, and why Moff Gideon seems to have foreknowledge of Grogu's post-Force fatigue. It also gives new meaning to Moff Gideon (and later Mando himself) saying "You may think you have some idea of what you are in possession of, but you do not. Soon, he will be back with me. He means more to me than you will ever know." Now, Moff Gideon's statement echoes not only a future of Imperial genetic engineering, but a past shared between Grogu and Moff Gideon.

Past ties between Moff Gideon and Grogu would not only explain their strange dynamic as seen in Chapter 14, "The Tragedy," it could also lead to a truly epic finale. If Grogu is such a big part of Moff Gideon's life, then the connection between the two of them is personal. However, the connection between Grogu and his new adopted father Din Djarin is undoubtedly far deeper and greater, so even Grogu's possible savior-turned-nemesis is no match for their bond.

The Mandalorian Season 2 is now streaming on Disney+.