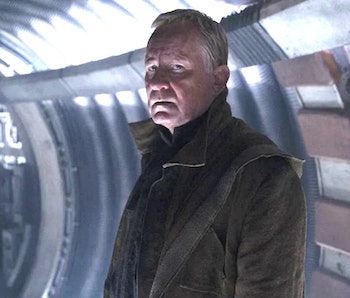 The glue of Andor wasn’t Cassian Andor himself, but Stellan Skarsgård’s Luthen Rael. From the first episode where he recruited Cassian, to the closing moments where he abandons his plan to take him out for knowing too much, he’s the pivot point for the burgeoning rebellion. He’s a revolutionary, a logistics guy, and an antique dealer to boot. But could his antiquing alter ego, the front he puts up to talk to Mon Mothma without raising suspicion, have some darker implications?

A TikTok posted by ScreenRant claims that because Luthen’s ship had a cloaking device, he must have ties with the Dark Side. The recent novel Tarkin revealed cloaking devices in Star Wars are powered by stygium crystals, and so far we’ve only seen them used in Dark Side and Imperial ships. If Darth Maul uses the technology, it’s going to have a certain reputation.

Could Luthen have ties to the Dark Side because he has connections to this technology? Not necessarily. He is, after all, an antique dealer, and sourcing rare and even infamous items is part of his job description. Maybe he just managed to come across some stygium crystals.

Still, that doesn’t mean Luthen has no Dark Side ties. As an antique dealer, he has all manner of contacts across the galaxy. If he has the reach to find Plo Koon’s mask and Padmé’s helmet, then he has the power to find some former Dark Side players.

Perhaps in Season 2 we’ll see him meet with one of his Sith sources and get some insider info on how the Empire is functioning. His job is more than just a front; it’s an opportunity. This theory makes even more sense because of an Easter Egg in the prequels: Emperor Palpatine’s office was covered in centuries-old Sith artifacts, so there’s clearly a market for these things. Maybe Palpatine himself will go to Luthen for his decorating needs.

We don’t know much about Luthen’s backstory aside from the fact he “made a decision 15 years ago.” Maybe seeing him with informants not as a guerrilla fighter but as a businessman would shed light on what led him down this path. For Andor, it would both introduce new characters who know about the Empire and the Sith, and reveal a bit more about Luthen’s murky past.

His occupation puts him face to face with history and the fight between good and evil, so why shouldn’t it affect his side hustle of overthrowing a galactic superpower? He may or may not have a Dark Side background, but if he’s in the antique industry and has both cloaking technology and ship-sabers, he definitely has some sketchy connections. Season 2 would be the perfect time for him to use them to their full extent.

Andor is now streaming on Disney+.