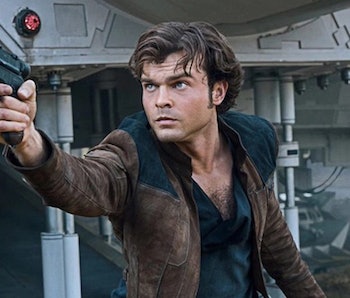 It’s an odd controversy for one specific reason: Star Wars has been recasting major characters for a very long time.

When asked about continuing to use existing Star Wars actors to play existing characters, Kennedy makes it sound like Alden Ehrenreich’s Han Solo was a failure because he is not Harrison Ford.

“There should be moments along the way when you learn things,” Kennedy told Vanity Fair. “Now it does seem so abundantly clear that we can’t do that.”

In the context of a larger Q&A, published later on Vanity Fair, Kennedy makes it clear she’s mostly talking about the idea that the character of Han Solo should not have been recast. “Some people have talked about how, well, maybe Solo should have been a TV show. But even doing Solo as a TV show without Harrison Ford as Han Solo…it’s the same thinking.”

So, to be clear, Kennedy is talking about Star Wars recasting only in the context of Alden Ehrenreich playing a younger Han Solo in Solo: A Star Wars Story. And she now considers that entire movie a mistake by saying, “We genuinely believed at the time it was a good idea.”

Fans on Twitter have already seized upon these quotes and run to the defense of both Ehrenreich’s performance as Han but also Donald Glover’s portrayal of Lando Calrissian. And who could blame fans? An underloved Star Wars film that many considered to be the most romantic and nostalgic of the post-2015 films has now, in essence, been labeled as bad and a mistake by the person running Star Wars.

It also appears Kennedy is blaming the casting of Ehrenreich for the underperformance of Solo at the box office. If that was her intent with these remarks, it’s troubling and seems unfair. But more bizarrely, this statement ignores the current reality of new Star Wars projects: All of them exist because of some kind of recasting.

In countless new interviews, including the new Vanity Fair piece, McGregor admits that the negative reviews of the prequels made it hard for him to love doing the Star Wars prequel films from 1999 to 2005. Relevantly, McGregor was not the first person to play Obi-Wan Kenobi. That role was originated by Sir Alec Guinness in the very first 1977 Star Wars. Essentially, McGregor feels like the mainstream critical assessment of his Obi-Wan Kenobi only became positive over a decade after the prequel trilogy was released.

But this McGregor paradox also existed when the prequels first came out. Even fans who hated the prequels admitted that McGregor was good as Obi-Wan. This kind of thing happens now, too. Folks will say they didn’t like Solo, but they liked Ehrenreich and Glover. So, in a sense, Kennedy claiming the casting of Ehrenreich as Han Solo didn’t work would be a little like an alternate timeline where George Lucas openly bashed Ewan McGregor in the year 2001.

What makes this stranger is the most anticipated Star Wars show this year stars McGregor — who is living proof that Star Wars recasting works very well. This is also true of every new Star Wars series coming out other than The Acolyte. The series Andor features Genevieve O'Reilly as Mon Mothma, a character played by Caroline Blakiston in 1983’s Return of the Jedi but portrayed by O’Reilly in Revenge of the Sith and Rogue One.

Ahsoka features Rosario Dawson, playing a character originated by Ashley Eckstein, while The Book of Boba Fett starred Temura Morrison (Jango Fett from Attack of the Clones), a roundabout recasting since the character of Boba Fett was initially played by several people in The Empire Strikes Back in 1980: Jeremy Bulloch and Jason Wingreen, who voiced Fett. George Lucas also recast the Emperor in between 1980 (Empire) and 1983 (Return of the Jedi). Clive Revill played the first Emperor, and of course, Ian McDiarmid is the more famous Palpatine from 1983 onward. (And let’s not even get started on Wedge, a character who was somehow recast during A New Hope.)

Essentially, it seems like Kennedy is saying recasting Star Wars characters who were not already recast by George Lucas is the thing that doesn’t work. And yet, it took nearly 15 years for Ewan McGregor to realize people loved and supported his version of Obi-Wan Kenobi. It’s only been four years since Solo came out. Maybe Lucasfilm should give Ehrenreich and Glover the benefit of the doubt. It would be a shame if we had to wait another 10 years before seeing them reprise their wonderful versions of those beloved scoundrels.

Obi-Wan Kenobi arrives on Disney+ on May 27.