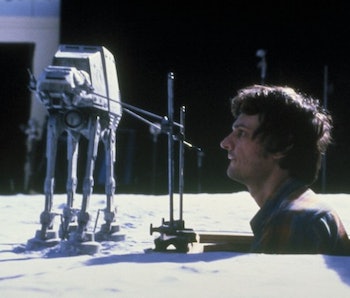 Star Wars was a game-changer — not only for science fiction on screen but for all of cinema history to come. However, when it comes to the actual filmmaking techniques pioneered in Star Wars, it would be wrong to call George Lucas’ first space epic the definitive VFX archetype for the 21st century. To borrow a line from a Star Wars character whose early years were shaped by practical effects: “There is another.”

In the classic Star Wars trilogy, the now-famous special effects company Industrial Light and Magic accomplished nearly all creature effects — from Yoda to the Rancor to the famous Tauntauns — through a combination of models, puppetry, and stop-motion animation. Even the mechanical AT-ATs in The Empire Strikes Back walked thanks to the result of models that were photographed in stop motion, a technique that requires minute changes to be photographed individually in order to simulate movement.

Although ILM used computer-generated images in films in the 1980s (notably, the Genesis planet simulation in Star Trek II: The Wrath of Khan), there was no way CGI was going to replace models, puppets, and stop motion in the ‘80s. That is until Jurassic Park.

As part of the new Disney+ series Light & Magic, both Phil Tippett and Denis Muren recount several of their experiences in pioneering special effects for the cameras of Lawrence Kasdan, who directed the Disney+ docuseries. What fans may not know is just how radical and strange it was for ILM to cease using stop-motion during the production of Jurassic Park.

“It was really tough, certainly, for me... the disappearing act of stop-motion,” Tippett tells Inverse. “I made peace with it, eventually, because the [CGI] technology presented an opportunity to do things that would make things significantly better in many, many ways. Plus, if you didn’t do it, you’d just be out of the picture.”

In other words, if a hypothetical version of Jurassic Park had been made in 1983 instead of 1993, all of the Velociraptor scenes would have been done with stop-motion models, making the action more akin to the jerky Tauntauns from Empire Strikes Back than the smooth, deadly dinos we all remember and fear.

It may be strange to consider, but the ILM documentary makes clear that most of us have lived longer in a blockbuster landscape dominated by CGI than by practical effects. Stop motion may have defined the golden age of creature effects — from Willis O’Brien’s work on King Kong in 1933 to various Ray Harryhausen movies — but, in terms of the history of Industrial Light and Magic, stop motion ended in 1993.

Many modern fans decry the diminished presence of “practical effects” in cinema, but both Muren and Tippett say they have no desire to make a movie using stop-motion effects today. This isn’t to say nostalgia for stop motion is entirely misplaced. After all, the process of stop-motion created one of the greatest Star Wars effects of all time: the AT-AT snow-walkers in The Empire Strikes Back.

“Any artifact of stop-motion makes it look mechanical,” Dennis Muren explains, noting that limitations during the making of Empire turned out to be a positive thing in this case. “Those were big robots, essentially. They were tanks. So, I think [stop-motion] added a lot there. The old school effect helped.”

Star Wars fans today consider the stop-motion of Empire to be of that era, but VFX artists in 1980 already considered stop-motion to be “old school.” Although ILM pioneered several techniques for photographing model spaceships, creature effects were still using processes that were essentially made popular in 1933. And when you consider that CGI is now the standard for almost all visual effects today, it’s surprising that there are fans out there who still cling to the idea that every kind of practical effect is better.

Certainly, the stop-motion AT-ATs are great, but does that mean Jurassic Park should have used stop-motion too? Some models were used in the creation of the film, but, ultimately, the CGI raptors were so fluid and organic that the contemporary viewer would never have mistaken them as a mechanical special effect of yesteryear. And, when it comes to a blockbuster, the viewer’s response matters.

“The mass audience isn’t really interested in [stop motion],” says Muren, a person who did some amazing stop-motion work throughout his career. “I think the fans love stop motion because the hand craftsmanship is literally in every frame. Some of us pick that up subliminally and are just attracted to it. But, you know, the mass audience doesn’t care, and focusing on that can actually hurt a movie.”

It wasn’t just sci-fi nerds who admired the artistry of the dinosaurs in Jurassic Park; the entire world believed they were real. And, so, monsters like the Rancor from Return of the Jedi had to become extinct so the dinosaurs of the ‘90s could inherit the Earth.