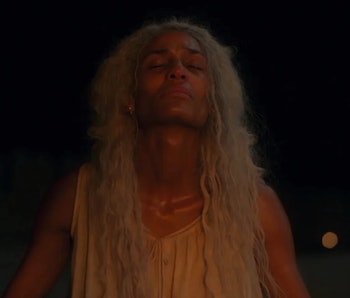 Episode 6 of House of the Dragon contained the definition of “going out with a bang.” After a miserable and dangerous birth ends in failure, Laena Velaryon, now the wife of Daemon Targaryen, staggers out in her blood-covered nightgown to meet her dragon, Vhagar. Vhagar, the biggest dragon in the world, towers over her and, after much yelling of “Dracarys,” reluctantly incinerates his bonded rider, giving her the warrior’s nde she wanted.

We’ve just been introduced to Vhagar, but according to the Episode 7 sneak peek the dragon goes missing. Here’s who could be behind the plot, and what weapon they may wield.

In the sneak peek we see Rhaena Targaryen say that Vhagar, her late mother’s dragon, is missing. In Episode 6, she expressed frustration that the dragon egg she received at birth didn’t hatch. Laena comforted her, reminding her there’s more than one way to bond with a dragon, and telling her she didn’t bond with Vhagar until she was 15.

Rhaena isn’t the only character with dragon troubles. Aemond, the younger son of Viserys and Alicent, doesn’t have one either, and it prompts his brother and nephews to taunt him with a pig in a crude dragon costume.

With Laena dead, could Alicent (or one of her henchmen, like Larys) have hatched a plot to kidnap Vhagar so Aemond has a dragon to bond with, as well as add another dragon to the King’s arsenal? Obviously, dragons are important in tense times — the prince of Pentos offered Daemon and Laena a comfortable living in exchange for the defensive might of their dragons. In the books, we know Aemond ends up riding Vhagar, but who would be ambitious enough to sneak away with the largest creature in the world? Probably someone with a lot of power.

Speaking of which, a powerful symbol also appeared in the sneak peek. We’ve seen Game of Thrones’ infamous catspaw dagger throughout the first half of House of the Dragon, but apparently it will appear in Episode 7 as well, wielded in front of a fire. Not only does it contain the prophecy Viserys shared with Rhaenyra, but it’s also the show’s most significant connection to its source material. It’s the dagger used to attack Bran all the way back in Season 1, and it’s then used to slay the Night King years later.

The dagger’s appearance could mean the prophecy we’ve heard so much about is coming back into play, or it could simply be used as a dagger. Its “catspaw” name comes from the fact it was used by a hired assassin the first time we saw it, and assassins are now part of the game thanks to Larys and his tongueless cronies.

The action is building, and we’re on the brink of the inevitable Dance of the Dragons. But there are still mysteries afoot, and just who’s plotting what remains to be seen. Expect the dagger and Vhagar to factor in soon.

House of the Dragon is now streaming on HBO Max.