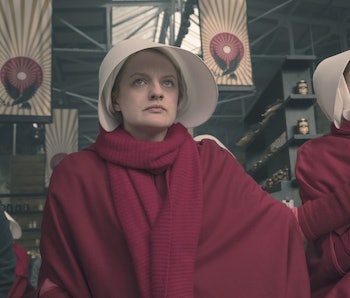 Blessed be the fruit, Hulu's award-winning series The Handmaid’s Tale is coming back for Season 4. The last time we saw June/Offred (Elisabeth Moss), she and the other handmaids of Gilead (formerly known as the United States of America) began planting the seeds of a rebellion meant to topple the Christian theocracy which has kept them down for years.

Emboldened, June worked covertly to help children and her fellow handmaids escape Gilead for the safe haven of Canada. While Season 3 ended on this hopeful note, June remains in Gilead, continuing to sow the seeds of rebellion and seeking justice. After quite the wait, fans will finally get to find out what awaits June and her comrades, and hopefully answer some questions from the Season 3 finale. Here's what we know so far about The Handmaid's Tale Season 4, including the release date, which cast members are returning, and whether this will be the last season of the dystopian drama.

Why wait? Here are eight shows worth checking out if you love Handmaid's Tale.

When is The Handmaid’s Tale Season 4 release date?

Per the official trailer for the Hulu series, The Handmaid’s Tale Season 4 will premiere on April 28 on Hulu.

Season 4 will arrive later than previous seasons, primarily due to the Hollywood-wide production shutdowns in March. Seasons 1 through 3 premiered in either the spring or summer. Season 4 was expected to be released in Fall 2020 after it was renewed just weeks ahead of the Season 3 finale premiere in 2019.

Filming on the new season started on March 2, 2020 in Toronto, Canada. It was originally supposed to wrap in August, but then the pandemic happened and halted production. Filming then resumed in September 2020, and finally wrapped on February 25, 2021.

Is there a trailer for The Handmaid’s Tale Season 4?

Yes! A full trailer for The Handmaid’s Tale Season 4 was released on March 31. It sets up a tense stand-off between Canada and Gilead following the events of the previous season, with June testifying to an unseen council, decked out in unusual attire for the character.

How many episodes will The Handmaid's Tale Season 4 have?

The new Season 4 release date window isn't the only big change coming to the award-winning Hulu show. Unlike previous seasons, which have had 13 episodes each, The Handmaid's Tale Season 4 will only have 10 episodes. When asked why the upcoming season would be shorter, The Handmaid's Tale showrunner Bruce Miller told IndieWire that the decision “was 100 percent creative," and went on to comment, "Some storylines just seem to shake out as a 10-episode story, in my eyes. It gives us a little more freedom because you can rely more on one propulsive element."

Just because there will be three fewer episodes in Season 4, it doesn't mean fans should read this as a sign of the show coming to an end or read into how the episode count will affect the story.

What’s the release schedule for The Handmaid’s Tale Season 4?

According to Deadline, The Handmaid’s Tale Season 4 will drop its first three episodes all on the same day: April 28. The series will then go on with airing one episode a week, concluding its fourth season on June 16.

Which cast members of Handmaid’s Tale will return for Season 4?

For now, we can expect all of the key cast members to return for The Handmaid's Tale Season 4. This includes:

Sam Jaeger has also been upped to series regular for Season 4, expanding his role as operative Mark Tuello. As for new characters, The Haunting of Hill House’s McKenna Grace will join the cast as Mrs. Keyes, described as a “sharply intelligent, teenaged wife of a much older Commander who rules her farm and household with confidence.” Other fresh faces include Zawe Ashton as an aid worker in Toronto and Moira’s girlfriend and Reed Birney as a new person June meets in Gilead.

Generally, a comment from Moss made in an August 2019 Hollywood Reporter interview seems to imply new characters will be arriving on the scene as the Canada-set section of the story continues:

"We have six regular [characters] in Canada now … we spent the whole Season 3 with June in a new house with Bradley Whitford as Commander Lawrence. Obviously, June's going to need to find a new fucking place to live. I don't think she's going back to that house! It's an opportunity for a new location, a new world, a new part of the world to show and new characters."

So even though the main cast is set and new characters have been announced, there could still be a few casting surprises in store. Or, just maybe, a character we've only ever seen in a supporting/background role could rise up to become more integral to the story. Keep your eyes peeled.

What is the plot for The Handmaid’s Tale Season 4?

June strikes back against Gilead as a fierce rebel leader, but the risks she takes bring unexpected and dangerous new challenges. Her quest for justice and revenge threatens to consume her and destroy her most cherished relationships.

The new season will pick up shortly after June secured the children’s safe voyage to Canada. Her action has put war on the table between Gilead and their neighbor to the north, as June herself seems to be evading a manhunt.

“June is going into a very interesting world. She's on the run, she's got women with her who she feels responsible for. She's also bleeding to death, basically,” Miller told The Hollywood Reporter. “June has a taste of freedom now, and we're going to follow her.”

Season 4 will also shift more focus to Canada, as the throng of arrivals puts emphasis on what life is like in their new lives in Toronto. “For Emily, Moira, and now for Rita, these people are living with the question of how much Gilead did they bring with them to Canada,” Miller said to THR. “That's what Aunt Lydia Ann Dowd said, 'Gilead is within you.' Which means you carry it around.”

June’s situation should complicate her situation with Nick, which will certainly play a large role in the season. The Season 4 trailer reveals that the newly-promoted Commander is still on the lookout for June, hoping to find her at all costs. Additionally, Serena and Fred are still being held prisoner, and the season will likely reveal their fate.

In an interview, Whitford was asked whether Commander Lawrence would get pre-Gilead flashback scenes a la Aunt Lydia. Here's what he said:

"I would love that. I love seeing Aunt Lydia back in the day, and I find those flashbacks really moving and kind of often the most terrifying and relatable, unfortunately, part of the show."

It's not a confirmation that we'll see Lawrence's past, but it would be interesting.

Has The Handmaid’s Tale been renewed for Season 5?

Praise be, the series has officially been renewed! The announcement came during Disney's 2020 Investor Day presentation. The cast of The Handmaid's Tale recorded a video to reveal they're in Canada filming Season 4 before confirming Season 5. Watch it below!

It's unclear if the fifth season will be its last, but the final season — whenever that will be — could even tie into The Handmaid’s Tale spinoff series, The Testaments. Here’s what Littlefield told TV Guide:

“We have not planned Season 4 to be the end, but we also look to Margaret [Atwood]’s book The Testaments and know that that story takes us 15 years into the future. We don’t see ending it in [Season 4], and I can honestly say to you, we don’t have a definitive out. But I think we want to keep the bar high, and it would not be a bad thing to leave the audience wanting more and then we could ideally shift into The Testaments.”

Miller made an interesting comment back in August 2019 to Vanity Fair after the end of Season 3: "When June dies, our guide dies, and our show dies." If anything, that comment is probably the most solid indicator to fans on when they can expect The Handmaid's Tale story to end for good.

More like this
Entertainment
8.9.2022 1:30 PM
Chainsaw Man anime release window, cast, trailer, studio, and plot for the ultra-violent show
By Mónica Marie Zorrilla
Entertainment
11 hours ago
Westworld Season 4 ending explained: Why we probably don't need Season 5
By Ryan Britt
Entertainment
8.12.2022 7:00 AM
Everything We Know About 'For All Mankind 'Season 4
By Ryan Britt