“We've seen each other before, right?” 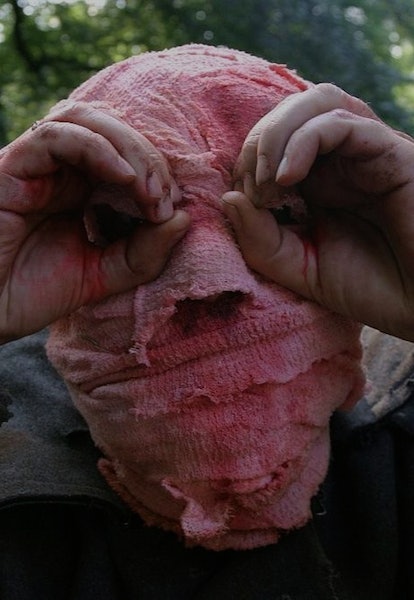 Time travel movies are tricky to pull off.

And they’re even more difficult when you’re dealing with time loops, which can quickly tie a story up in knots.

Eventually, all time travel movies — even classics like Back to the Future and Groundhog Day — fall apart under scrutiny, but the finest ones entertain you long enough that you don't notice or even care about such details. That’s one reason the notoriously dense and confusing Primer is highly regarded by so many genre fans, who marvel at the scary realism of its science. But what if I told you there was a movie just as grounded and believable as Primer, one that doesn't require five viewings and a diagram to understand?

Enter Nacho Vigalondo. In 2007, he made his feature directorial debut with Timecrimes, a film that's part slasher, part thriller, and all time travel goodness. You don't need to watch this movie multiple times to understand it (though you might want to do so anyway, given that it's that good), but Vigalondo’s film still provides a deliciously complex pretzel of a time travel mystery, one that begs to be solved while delivering one of the best stories ever written within its genre.

Karra Elejalde stars as Héctor, a man who lives in the Spanish countryside with his wife Clara (Candela Fernández), in a house that undergoing renovations. Héctor spends his time looking at the horizon through binoculars, until one day he notices a young woman take off her T-shirt in the forest. When he one day decides to head to said forest and investigate some strange noises, he’s confronted and stabbed with a pair of scissors by a man wearing a trenchcoat, whose head wrapped in bandages. Pursued by this man, Héctor seeks help from a scientist (played by Vigalondo himself) who tells him to enter a strange vat filled with liquid. Doing so, Héctor realizes he's traveled an hour backward in time.

The best thing to be said about Timecrimes is that its mystery is exquisitely laid out, in a way that avoids becoming overly convoluted while still offering plenty of intrigue. Vigalondo’s script establishes the rules of time travel for the audience early on, which allows them to stay ahead of the characters for most of the film. But Vigalondo accounts for this by constantly adding new elements to the mystery.

Just as you start getting comfortable predicting the twists and turns ahead, another knot materializes in the writer-director’s grand pretzel, and you’re left grasping around for answers. Meanwhile, the script adds an extra layer of black humor — Timecrimes is basically a series of accidents that keep escalating, comically so — that makes the entire affair a blast to sit through.

One common problem with time loop movies is that they end up feeling repetitive, as you are forced to sit through the same day over and over again, with slight alterations. Vigalondo subverts this by not treating the film’s central loop as a past day repeating itself, but as the film’s present slowly unraveling as the mysteries of its events evolve. In some ways, it feels like that fateful Time-Turner scene in Harry Potter and the Prisoner of Azkaban, in which Harry and Hermione stumble upon events they had already experienced, only with a new knowledge of what set those events in motion to begin with. Even as you puzzle your way ahead of the characters, Jose Luis Romeu's "present-tense" editing keeps the film wholly unpredictable.

Of course, Timecrimes wouldn’t be nearly as effective were it not for Elejalde's fantastic performance. Rather than play Héctor as a detective, a scientist, or even an everyday guy trapped in cycles larger than himself, Elejalde plays him with the desperation of a man cheating on his wife and trying to hide it. Even if Timecrimes is structured as a time travel thriller, the plot mostly involves Héctor trying to fix things that would prevent him from starting the loop in the first place, so as to address whatever has to happen, will happen, or has already happened in his life.

Vigalondo's camera follows Héctor with notable skepticism, as if to tell the audience that they should be wary of his intentions, even if the man blunders through his predicament with authentic confusion. Still, he keeps escalating the situation rather than keeping quiet or, even more boldly, coming clean.

Timecrimes avoids the pitfalls of most time travel movies by keeping its action moving at a quick pace, introducing new elements to the plot so frequently you stay invested in solving its mysteries and anticipating what happens next. More than a decade later, the film includes one of the best examples of a time loop done right.

Timecrimes is currently streaming for free on Tubi.