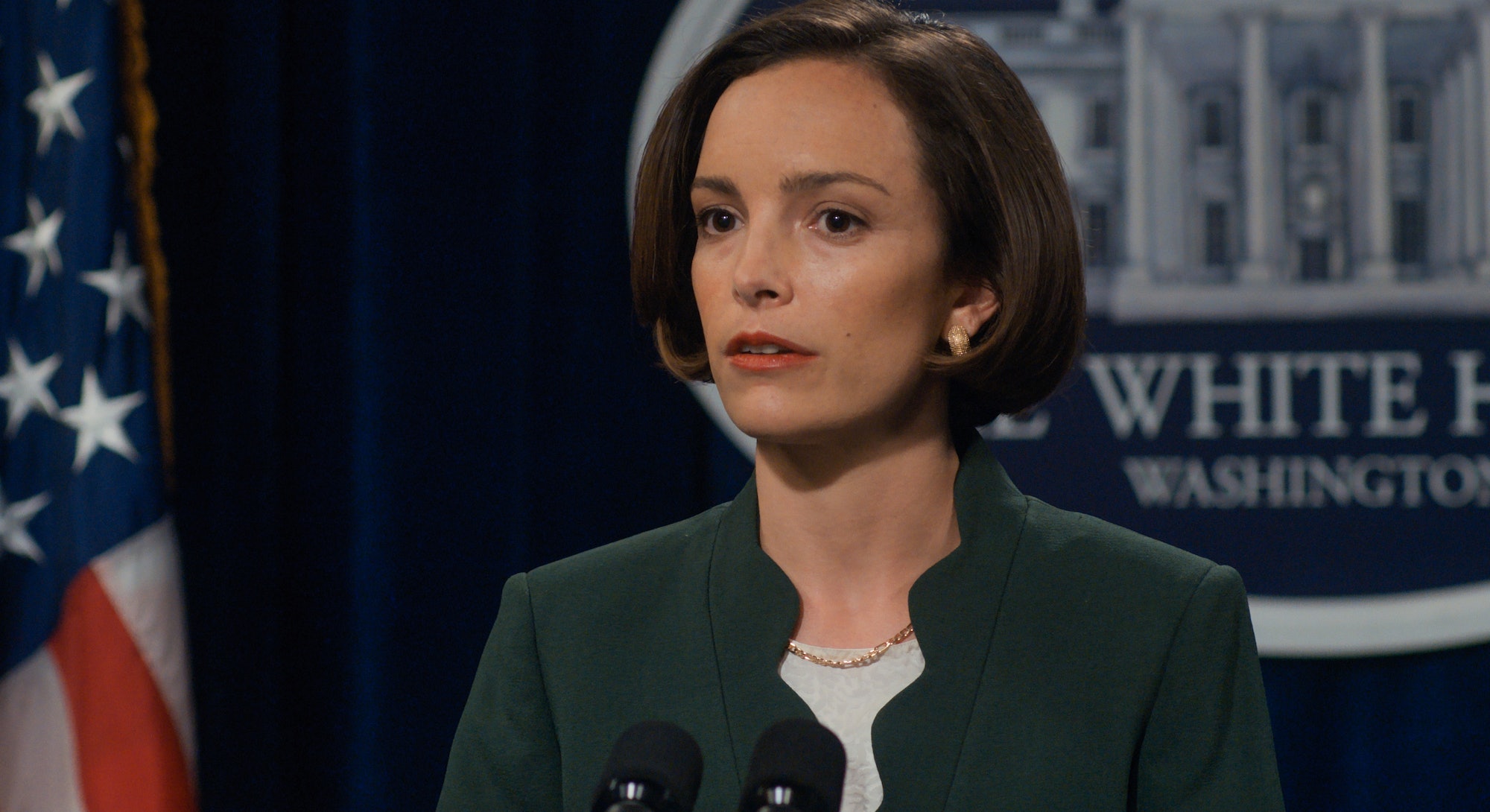 In the alternate timeline played out in For All Mankind Season 3, a gay president is a reality. In the game-changing, penultimate episode of the season, President Ellen Wilson comes out to the entire American public as a gay woman. For Jodi Balfour, the actor who plays Ellen, it was a “huge” moment. But, interestingly, Balfour has known about this wonderful storyline since she was hired four years ago, well before For All Mankind was even on the air.

“I truly almost fell off my chair.”

Ahead of the finale of For All Mankind Season 3, Inverse caught up with Balfour to discuss the big twist for Ellen, as well as what it represents for our own timeline here on Earth. Spoilers ahead for Episode 9 of For All Mankind, “Coming Home.”

Back in 2018, when Ronald D. Moore first pitched the journey of astronaut Ellen Wilson, Balfour says she was outright told the ambitious details of the “30-year arc.”

“I truly almost fell off my chair,” Balfour tells Inverse. “I had auditioned for the part already, and they were interested. They sort of talked me through the nuts and bolts of Ellen's journey and brought me up all the way to where we end Season 3. And when Ron said, ‘Then, she becomes the first female president of the United States in the 90s.’ I was truly like, ‘Alright, where's the contract?’”

In 2021, at the conclusion of Season 2, For All Mankind showrunner Ron Moore told Inverse that there “is a plan” for the entire seven-season arc of the series. Now, it’s clear, that he was very serious. In 2019’s Season 1, Ellen was nowhere near becoming the President of the United States. Instead, in the alternate timeline then set in 1969-1973, Ellen was still part of the astronaut corps — one of the alternate universe’s first female U.S. astronauts, much earlier than what occurred in our reality.

“Our show is categorized as science fiction, of course,” Balfour says. “But because the alternate history stuff kind of sets its own course, all the space stuff is kind of believable. It’s not far-fetched for them to be on Mars. So we get to an interesting point here where the most extravagant stretch or suspension disbelief is my character’s story.”

What Balfour means is that, somehow, amid the hotels getting turned into spacecrafts, dueling sets of astronauts on Mars in 1994, and various other sci-fi storylines, a closeted gay woman coming out of the closet to the American public in the mid-'90s is perhaps the biggest narrative swing For All Mankind has ever taken. The question is: could it happen in real life?

“I think perhaps if women had joined NASA sooner, or if there had been women in major positions of power in the ‘60s and ‘70s, then it wouldn’t seem so far-fetched,” Balfour says. “I mean, what's going on with the Supreme Court right now is pretty terrifying. And if that is any kind of litmus test for where we’re at as a culture, it’s pretty devastating. If only we could live in this other world.”

“The most extravagant stretch or suspension disbelief is my character’s story.”

In the story of For All Mankind, Ellen’s ascendency to the presidency mostly happens because she’s an all-American hero. In Season 1, in order to compete with the Russians, Richard Nixon fast-tracks a program that puts non-male astronauts into NASA a decade before it happened in real life. Interestingly, it’s in this detail where some other science fiction overlaps. In our timeline, it wasn’t until Nichelle Nichols pushed for Black and female astronauts in 1977 that it actually happened. Nichols, of course, was famous for being an actress on Star Trek where she repped for a future in which racial equity was just a fact of life.

Nichelle Nichols changed the face of the space program for women and people of color, thanks to the power of science fiction. Could something similar happen with For All Mankind? Could Jodi Balfour’s lesbian president hero inspire real change in our real world?

“If only we could live in this other world.”

“I really do think the answer is yes,” Balfour says. “I think telling stories with real faces, human faces, and putting those stories inside of people’s living rooms throughout the country is the power of storytelling.”

Although Balfour can’t confirm what’s next for President Wilson in Season 4 of For All Mankind, she does think the show inspires “hope” everywhere, even if it is by using an alternate past to think differently about the present. Fans of Ellen Wilson, it turns out, are everywhere.

“I actually just traveled across the country,” Balfour says. “I did a massive road trip. And I can't tell you the number of people in the middle of this country who came up to me and told me what the show means to them and what this character means to them. I was pretty surprised by that. I would love nothing more for us to live in a world where there is a woman in the Oval Office. And, yeah, I do believe that it’s possible.”