In 'For All Mankind,' one character represented just what sci-fi is about

“That’s all it takes. Knowing we won’t kill today.” 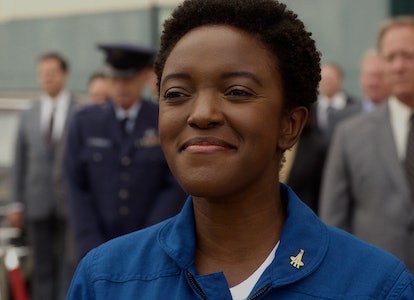 Seconds before she becomes the first Black American to command a NASA mission, Danielle Poole reflects on what it means to be human. She delivers a few stirring words with a smile just before the launch of a Saturn V rocket.

“We're human beings with the blood of a million savage years on our hands, but we can stop it,” she says. “We can admit that we're killers, but we're not going to kill today. That's all it takes. Knowing that we won't kill today.”

In the ninth episode of For All Mankind Season 3, “Triage,” the must-see Apple TV+ series reminds us alternate history speculation isn’t about limp reimagining of the past. It’s having something critical to say about our present – and what we aspire to in a space-faring future.

Verbalized by actress Krys Marshall, Danielle’s words are lifted from one Captain Kirk, from a 1967 Star Trek episode (“A Taste of Armageddon”). Its inclusion isn’t a surprise when you learn showrunner Ronald D. Moore is a former Star Trek producer. But Danielle quoting Kirk carries resonance beyond nerd cred.

SCENE STEALERS is a countdown that salutes the unforgettable small-screen characters of the year. Danielle Poole is #22.

Channeling Trek echoes the progressive ideals sci-fi has long stood for. When Star Trek premiered during the Civil Rights movement, its diverse ensemble and themes on unity meant something beyond the airwaves. Civil Rights leader Martin Luther King Jr. was a fan; he personally implored series star Nichelle Nichols to stay on the show because of her significance as a lead Black woman on TV. Proof of Nichols’ legacy is evident in the many people of color today who cite her as their inspiration to chase the stars.

Who Is Danielle Poole?

In any universe, sci-fi is a balm on cultural ills. With Danielle Poole, For All Mankind subsumes Star Trek to be more in touch with progressive ideals than the source it’s paying homage to and creates a counter-mythology to our predominantly white history of spaceflight. In 1977, Nichelle Nichols worked with NASA to recruit women and people of color into the program. In the alt-timeline of For All Mankind, the doors open a lot sooner than that.

“I didn’t realize that, to this day, there had only been three Black women who had been into space,” Krys Marshall told Blacktree TV in May. “That aspect of our show is encouraging. But it also breaks my heart because the world is not like that.”

With a résumé of minor roles in other similarly forward-thinking genre shows like Supergirl, Marshall finds her breakout performance in For All Mankind. Her authenticity as a sci-fi fan (she hosts the official For All Mankind podcast where she regularly dives into Easter eggs in every episode) extends to her philanthropy, as in her work with the Young Storytellers Foundation that mentors children through creative storytelling. For Krys Marshall, the lines blur between her real self and her role, cementing Danielle Poole as more real than the history the series swerves from.

“Sci-fi is a balm on cultural ills”

Danielle Poole is not the main character of For All Mankind, but that could — and should — change after Season 3. In the finale, “The Grey,” it’s Danielle who makes the final call to go through with the Apollo-Soyuz mission, even when Houston orders her to abort. In the next season of the show, the period setting will jump forward to (a still-alternate) 1994; Danielle will certainly age a bit when we see her again. But there lies spin-off potential. Imagine a show still set in an alternate 1980s (still, for some reason, an appealing era for television) centered on her work within NASA. In Season 2, Danielle was captured by Russians, and we never see what happened until her release. There’s plenty more to see through her eyes.

As our real-world struggles to properly dismantle systemic racial injustices, Danielle Poole’s homage to her favorite television show carries weight from here to the final frontier. Progress is a process. Star Trek famously proposed that things can be better in our future, if we work together for it in our present time. For All Mankind wonders something else: What would our present be if we worked together in our past?

In real life, Russia and the U.S. really did have “handshake” missions like Apollo-Soyuz in 1972. And the first Black woman to go to space was Mae Jemison, who flew aboard the Endeavor in 1992. But the stakes are higher in the alt-timeline of For All Mankind. That such a critical mission was overseen by Danielle Poole wasn’t just one step for women, for people of color, and for people everywhere. It was a giant leap.

For All Mankind is streaming now on Apple TV+.

More like this
Entertainment
8.5.2022 12:30 PM
For All Mankind Season 3’s space mogul is better than Elon Musk — here's why
By Ryan Britt
Entertainment
8.13.2022 12:00 PM
Why Andor is bucking one of the most popular trends in Star Wars history
By Dais Johnston
Entertainment
8.9.2022 1:00 PM
Has your favorite HBO Max show been canceled? The fate of 9 sci-fi series revealed
By Robin Bea
Related Tags
Share: