With 'Eternals,' Kieron Gillen is paving the way for Marvel's movie future

“I’ve got this mythology of Tolkienesque scale.” 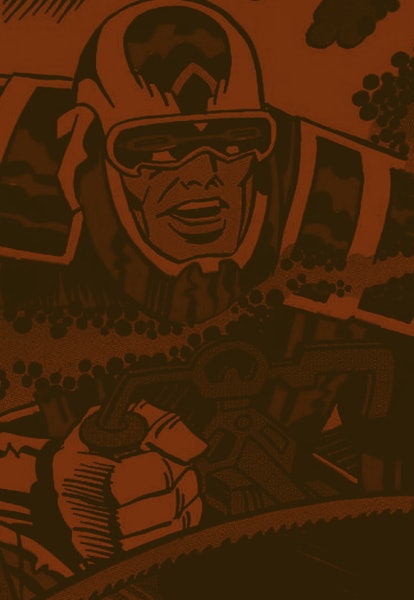 If you want to know what’s coming down the road in the Marvel Cinematic Universe, just read the newest comics from the House of Ideas.

Case in point, the upcoming Disney+ show WandaVision is expected to borrow heavily from 2015's comic storyline House of M, while the MCU sequel Doctor Strange in the Multiverse of Madness could take its inspiration from 2017's Doctor Strange and the Sorcerers Supreme.

So while an Eternals movie might be arriving in theaters later this year, a new Eternals comic run that debuted on January 6 from famed writer Kieron Gillen (Avengers vs. X-Men, Star Wars: Darth Vader) and artist Esad Ribic (Secret Wars, King Thor) could reveal where the MCU goes a few years from now in Marvel Studios' Phase Five, or beyond.

“When doing superhero work like this, the idea for me is not to really think about the current movie,” Gillen tells Inverse, “but to try and think about three movies down the road. What next? You want to push it further.”

To that end, his Eternals comic worries less about re-introducing the lesser-known superhero team (the movies will handle that), and more about charting out their future. “I basically made up another 40 Eternals,” Gillen says.

The Eternals were originally spawned in 1976 from the fertile mind of Jack Kirby, the comics industry legend who helped forge the Marvel Universe with Stan Lee by co-creating The X-Men, Fantastic Four, The Avengers, and more. The series initially ran for two years, but was cancelled after 19 issues.

Its complex mythology centers around the Celestials, towering space gods who came to Earth one million years ago to tamper with evolution and created two distinct races of humanoid beings: the cosmic-powered Eternals and the brutish, unstable Deviants.

“The thing with Eternals is that it’s so clearly bigger than the page,” Gillen says. “I’ve got this mythology of Tolkienesque scale, but it’s all this backdrop. I can pick up and use elements as and when we need, but I don’t think we’ll ever use it all.”

Inverse connected with Gillen to discuss his relationship with this angelic society of super-beings, the founding work of Jack Kirby, and Marvel’s upcoming Eternals feature film — plus a preview of Eternals #2 before its release on February 12!

What was it about Jack Kirby's The Eternals and its epic mythology that lured you back to Marvel?

I had been away from the Marvel Universe for basically five years. I’ve been mainly writing my own books (DIE, Once & Future, The Wicked + the Divine) and having fun with Star Wars. I knew if I was ever going to come back to the superhero shared universes, it’d have to be to do something I’ve never done before. I’d said no to quite a few things before I said yes to Eternals.

Why? Well, taking a classic car that’s been in a garage for a few years, replacing its engine, adding a lot of chrome, and putting it on the road, seeing how fast it could go? That’s something I haven’t done before. That sounds fun.

The comic trailer for Eternals #1 hit 3.8 million views. Do you sense a real appetite for this series? How would you describe it to fans unfamiliar with the source material?

I hadn’t noticed that. 3.8 million. Cripes. My head has been very much down and concentrating on the work. That’s a hell of a thing.

Well, I’ll go into some of this in a bit, I’m sure, but for this run, the one sentence is, “Imagine a species of Guardian Angels who act like Eternal Slayers to a species of monsters.” It’s more complicated, but that’s the core. That’s what they’ve done, for a scarily long time.

How do you deliver a new perspective on the iconic Jack Kirby creations for a new generation?

It’s basically an intense version of what I do when I take on work for a character that isn’t mine. I take a look at it, think what the appeal is, what the themes are beneath the surface, what excites me about it, and what could be made to work better than it already does with a few tweaks.

In the case of the Eternals, they’ve been some of the best supporting characters in the Marvel Universe, and parts of their cosmology have been adapted to be absolutely fundamental to Marvel as a whole – everyone loves the Celestials, right? However, they’ve never quite taken a lead role. Why?

“Who do you care about more? Actual Thor or someone who was mistaken for Thor?”

I looked at the core idea that Kirby put in – the core myth. That’s that a million years ago, the Celestials turned up and created 100 Eternals and 100 Deviants and then left. The Deviants breed, begetting monsters who threaten humanity. The Eternals are basically protectors of all of this. So… they’re created by gods, to protect humans from devils?

The Eternals aren’t gods. They’re Angels. So, like Angels, I have a species of 100 who don’t breed, and don’t change in their fundamental way. There’s a real sadness there, which I think we can do a lot with – there’s a core sadness to all the great Marvel characters. It’s what defines Marvel Characters, in my opinion.

That’s a key thing – the Eternals are a mythology, and I’ve tried to integrate everything we know about them into a single fabric. They’re also a society. This isn’t a superteam book.

With such an ambitious scope, how did you and Esad Ribic map out the story and emotional chords you hoped to strike for Eternals?

With Esad, I work a lot like I do with Jamie McKelvie on The Wicked + the Divine – as in, I go away and create this huge document of time and space and history, and then present it to the artist and work out how to actually execute what we need. The thing with Eternals is that it’s clearly bigger than the page. I’ve got this mythology of Tolkienesque scale, but it’s all this backdrop. I can pick up and use elements as and when we need, but I don’t think we’ll ever use it all.

What were your associations with Kirby's The Eternals and what inspiration did you draw from in composing your narrative?

I think my first image of the Eternals was the Celestial, looming magnificently in the back of the powers of the Universe in Infinity Gauntlet. Just a classic Kirby design which echoes through everything – that they’ve found a home outside of the Eternals says a lot. Aside from her was Sersi in the Avengers – I didn’t have much access to American comics when I was a kid, but she was an immediately striking character who I wanted to know more about.

“What would Jack Kirby Do? is something I regularly think.”

In practice, bar loving Sersi, all I brought to it was the sense of beauty and weirdness and scale. I knew it had to evoke the scale which Kirby does, which involved creating a lot of space for Esad. Bar that emotional magnetic North, this is actually a book which comes from the adult mind and its investigation and extrapolation of what’s been done before. I’m never interested in recapitulating what’s been done before. I’m interested in finding new ways to speak eternal truths.

There is one core Kirby thing I always come back to when doing superhero comics. The question “What would Jack Kirby Do?” is something I regularly think. Most creators have their own answer for that, but mine is almost always, “Make up something new?” While this is a book which tries to take from a lot of places, it’s also a book which generates a lot of new stuff. I basically made up another 40 Eternals to complete the 100.

With the Eternals movie coming in Fall of 2021, how, if at all, will this series dovetail into Marvel's feature film as a major entry point?

When doing superhero work like this, the idea for me is not to really think about the current movie – but to try and think about three movies down the road. What next? You want to push it further.

Simultaneously, you also want it to not just contradict it for the sake of it. You want it to be welcoming… and then be more. As all the Eternals were dead and just been resurrected at the start of my run it’s a chance for them to take on new looks and appearances in line with the films.

Eternals are simply not like us, and this is a good example of it. There’s a line in the first issue where Ikaris tells Tony Stark that a major change of appearance happens fairly often – every 25,000 years or so. That says a lot.

Esad Ribic seems like an old soul of an artist who conjures up a haunting style that always enhances the story. What was this first collaboration with him like?

That’s absolutely it. He’s someone who just paints like a master, someone whose images are heavy with the weight of the world. There’s a poetry and a scale to his work. I think he’s the premier comics fantasy artist of our time, so when I’m writing for him, I’m always bearing that in mind. I’m just a huge fan.

The collaboration has just been everything. I’m still reeling from Esad saying yes to it, really. Esad? Working with little ol’ me? Really, I spend most of my life trying to delete captions, because the last thing I want to do is cover up any of his art.

As the story advances, what can readers anticipate as Ikaris' journey continues and how does it fold into the greater Marvel Universe?

Ikaris is very much our entry point into the world – along with Sprite. Ikaris is one of the simpler souls of the Eternals. Sprite has been mind-wiped and knows nothing of the modern world. That means they’re great viewpoint characters to lead us into their world. The first arc, as well as being a bleak murder mystery, disaster movie, and conspiracy thriller, is also a guide to the world Esad and I have summoned. You meet new faves and anti-faves along the way, and I can’t wait for you to meet them.

In terms of the greater Marvel Universe, we’re trying to balance it. Iron Man’s in the first issue — we are very much a book set in the Marvel Universe, and our villain is obviously a huge Marvel player. We want to concentrate on our own corner and give people a single book they can jump aboard and follow the story. I’m sure we’ll spill out further down the line, but the aim is to have a first year which shows you why the Eternals are stars.