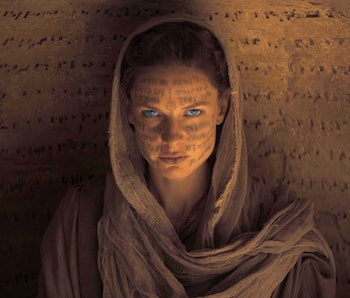 Before the Spice could flow and Paul Atreides was born, the sisterhood of the Bene Gesserit existed in the world of Dune.

In the lore of this dark and dangerous sci-fi galaxy — as depicted in Denis Villeneuve’s 2021 blockbuster, and its 2023 sequel — it’s difficult to overstate the power wielded by the order of the Bene Gesserit. But for those unfamiliar with Frank Herbert’s Dune novels, the importance of the Bene Gesserit can be confusing to explain.

To fix this and because the Bene Gesserit are as awesome as they are interesting, HBO Max will soon be streaming a prequel series, Dune: The Sisterhood; lifting the veil of secrecy around the Bene Gesserit. Here’s everything to know about this upcoming TV series: the showrunner, the cast, the trailer, and, of course, how it all connects to the Dune films.

And be sure to bookmark this page, as we will keep it updated with all the news and details on Dune: The Sisterhood as they emerge. Mild spoilers for the Dune novels ahead.

What is Dune: The Sisterhood?

Dune: The Sisterhood is a direct-to-streaming TV series in development at HBO Max. The series is set to tell the story of the Bene Gesserit, a religious and quasi-magical order of female “witches” within the Dune canon. That ominous catchphrase you may have heard — “fear is the mind-killer” — comes from the Bene Gesserit. They’re like Jedi, but all women and super-secretive.

The series will be set roughly 10,000 years before the events of the first Dune film.

Who is the showrunner for Dune: The Sisterhood?

First greenlit in 2019, the series initially had screenwriter Jon Spaihts on board as showrunner. But on July 22, 2021, Variety revealed that Diane Ademu-John was replacing Spaihts as the showrunner of The Sisterhood. Ademu-John previously worked as a producer on Netflix’s The Haunting of Bly Manor, The CW’s The Vampire Diaries, and Fox’s Empire.

It had previously been reported that Dune director Denis Villeneuve will direct the pilot episode of The Sisterhood. However, as Diane Ademu-John and Legendary revealed on Twitter on April 28, 2022, the first two episodes of Dune: The Sisterhood will be directed by Johan Renck.

Who is in the cast of Dune: The Sisterhood?

The cast of Dune: The Sisterhood is an interesting mix of familiar faces and rising stars. If you’ve even a remote interest in science fiction TV and film, you’ll recognize at least one of these names.

One point of interest here is that none of these characters come from the original six Dune novels. Instead, sisters, Valya and Tula come from the 2011 novel Sisterhood of Dune, written by Kevin J. Anderson and Frank Herbert’s son, Brian Herbert. Empress Natalya seems to be a composite of a few characters from this novel and other prequel books, while Princess Ynez, Mikaela, Sister Jen, Emeline, and Lila all appear to be entirely new characters created for the TV series.

Is there a trailer for Dune: The Sisterhood?

What can we expect Dune: The Sisterhood to premiere on HBO Max?

Dune: The Sisterhood was slated for 2020 at one point, but now, although IMDB lists “2022” for the release date, sometime in 2023 feels more reasonable. A 2023 release date would also be very interesting, simply because that’s the same year that Denis Villeneuve’s theatrical Dune: Part Two hits theaters in October.

According to Variety, the new series “will serve as a prequel to the films.” Specifically, this has been revealed to be the year 5 BG, which in the Dune timeline, stands for “Before Guild.” Essentially, the series takes place in a tempestuous moment in the galaxy’s history, a few centuries after the Butlerian Jihad has outlawed artificial intelligence, but right before the Spacing Guild is codified, which creates the economic status quo for centuries to come. This means we’re also at the very beginning of the Bene Gesserit sisterhood, at least the version of that we come to know in the later Dune installments.

Though some apocryphal sources suggest the Bene Gesserit began on Earth, our planet doesn’t really appearing the Dune mythos, even though it canonically is where all these people came from. That said, this series will likely not be set on Earth, but likely focus much of its action on the planet Wallach IX, which, historically, is the home base for the Bene Gesserit. This means that a chunk of this new Dune series might not take place on Dune itself, the planet Arrakis.

Then again, because the Bene Gesserit’s Missionaria Protectiva program is directly responsible for seeding religious myths on Arrakis (which Jessica and Paul benefit from centuries later) it seems very likely at least some of the action will happen on Dune. The new character of “Mikaela,” is described to be as “a strong-willed Fremen woman who serves the royal family while longing for a home planet she’s never known.” This seems to be a huge clue that at least some earlier version of Arrakis will feature prominently in The Sisterhood, since, the Fremen (at least by the time of Dune) are native to Arrakis.

With all the royalty in Dune: The Sisterhood, it’s also likely to expect plenty of action to take place in the royal courts, which, at this point will either be located on the planet Kaitain or, maybe Salusa Secundus. Either way, with at least three different planets in play, The Sisterhood may be different than the film versions of Dune in one big way: There might be a lot more space travel.

This article was originally published on July 26, 2021