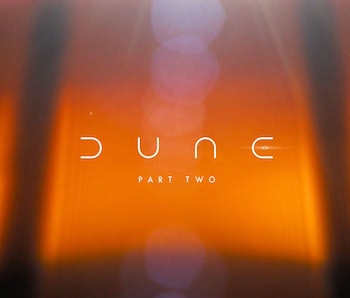 Dune takes audiences on an unforgettable journey. As you likely know from watching the movie, Dune: Part One is only half of the whole story. But fear not. Fear is the mind-killer! A sequel is coming. Adapted from Frank Herbert’s classic science fiction series, the first movie is just the beginning and builds its story with a sequel planned.

Dune: Part One follows Paul Atreides (Timothée Chalamet) as he moves with his parents to Arrakis, a dangerous planet that produces a highly valuable resource called spice melange. Political conflicts turn violent, setting Paul and his mother, Lady Jessica (Rebecca Ferguson), off on a journey across the deep deserts of the Dune planet. Paul, who has prophetic visions, must come to terms with not only his present but an uncertain future he can only see in glimpses. The movie starts Paul’s adventure with the intention of continuing it in the next installment, and even beyond that, too.

Now that Dune: Part One is out in the world, what is going on with Part Two? Here's everything we know about the Dune sequel, from its tentative release schedule to a possible Part Three.

Major spoilers for Dune: Part One ahead.

Yes. Warner Bros. and Legendary Pictures confirmed on Twitter that Dune: Part Two is happening, just days after Dune: Part One was released in theaters and on HBO Max.

It was odd for the studio and director Denis Villeneuve to include “Part One” in the title of the first Dune before they confirmed the sequel. In an interview with Inverse, Villeneuve said that he was “standing with one foot in the air, waiting for the permission to make Part Two.”

It seems like the studio wanted to wait to see how Dune: Part One performs at the box office, and what streaming ratings it will bring in from HBO Max. It ended up making just over $40 million in its opening weekend at the U.S. box office. According to Variety, 1.9 million U.S. households watched the movie on HBO Max over its first weekend.

Back in October 2021, Deadline reported that the sequel is scheduled for October 20, 2023. However, as of June 30, 2022, Deadline claims that the release date has been moved back slightly. As of this writing Dune: Part Two will hit theaters on November 17, 2023.

This shouldn’t come as a huge surprise, since a large-scale production like Dune takes a while to plan, film, and edit. Finding a time when the film’s sprawling cast is available (even after plenty of deaths in Part One) also won’t be easy. Still, unless things change, we can look forward to seeing Paul and Chani again in just two years.

Does Dune: Part Two have a trailer?

Dune: Part Two does not have a trailer, but you can re-watch Part One’s trailer below.

Oscar Isaac’s Duke Leto and Sharon Duncan-Brewster’s Dr. Liet-Kynes will probably not return as their characters passed away in Part One. However, if Dune: Part Two also adapts part of Dune's second book, Dune Messiah, Jason Momoa’s Duncan Idaho could return as a ghola clone. Though, it’s probably a good bet the rebooted Duncan (also known as “Hayt”) won’t appear until the third film in the trilogy. Assuming we get that far!

Who are the new characters in Dune: Part Two?

What is the plot of Dune: Part Two?

Dune: Part One adapted around the first 500 pages of the book. Dune: Part Two is expected to cover the rest of the 1965 Dune by Frank Herbert.

On July 18, 2022, Warner Bros. and Legendary released the following, official synopsis of the movie.

“This follow-up film will explore the mythic journey of Paul Atreides as he unites with Chani and the Fremen while on a warpath of revenge against the conspirators who destroyed his family. Facing a choice between the love of his life and the fate of the known universe, he endeavors to prevent a terrible future only he can foresee.”

If it follows the book closely, Part Two will continue telling Paul’s story, chronicling his time with the Fremen, his relationships with Chani and Princess Irulan, and his plans to take down the Empire. Villeneuve shared with Inverse that a scene where Josh Brolin’s Gurney Halleck sings was cut from the first movie. He said he hopes to find a place for it in Part Two.

We won’t spoil more than that. If you want to know more about what happens, we have a series of explainers that dive into who will be in Part Two and what the sequel will explore.

Will Dune: Part Two be on HBO Max?

Because Dune: Part One debuted on HBO Max the same day as theaters, it’s fair to wonder if its sequel will also premiere on the streaming service. As of now, there is no confirmation Dune: Part Two will also be made available on HBO Max when it’s ready to be released.

While Dune: Part One and Part Two will cover the first book of Frank Herbert’s series, there could be a third movie based on the second book, Dune Messiah.

In our interview, Denis Villeneuve hinted at a third movie, and if both Part One and Two perform well, it’s not far-fetched that Warner Bros. would order a third film to round out a trilogy.

However, it is too early to say if Dune will be a trilogy. Time will tell just how far and long the spice will flow.

Dune: Part Two is scheduled to arrive in theaters on October 20, 2023.