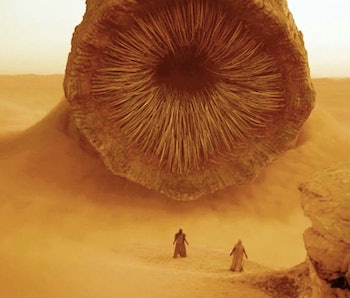 The struggle for the Spice on planet Arrakis might not be a feel-good hero’s-journey narrative in the tradition of Star Wars, but heroic characters abound in the epic story of Dune, on its way to theaters later this year as an epic saga directed by Denis Villeneuve (Blade Runner 2049).

And those good guys — like Paul Atreides and Duncan Idaho — naturally must contend with absolutely terrifying villains, the likes of which are nearly unmatched in the science-fiction and fantasy genres. For Dune heads, getting to see what Stellan Skarsgård does with the role of wicked Baron Harkonnen is just one reason to be excited for the impending blockbuster. On top of that, Dave Bautista is playing the Baron’s henchman, Glossu Rabban Harkonnen.

Still, there’s one baddie you may have forgotten about, and he could be the secret Moriarity of the movie. Recently, one Dune actor revealed details about his character that might change the way we think about the movie. Mild spoilers ahead.

Who is Piter de Vries in Dune?

Piter is what’s called a “mentat,” which in the Dune galaxy is a person who essentially acts as a living computer. (A.I. is illegal in Dune, thanks to a complex backstory involving a machine jihad.) In the first Dune novel, two mentats play major roles: Thufir Hawat, who loyally serves House Atreides, and Piter, who works for the Harkonnens. Because of their roles as human computers, mentats know all the angles on various conflicts and tend to be able to predict various outcomes. Piter is odd in that he’s a “twisted mentat,” fascinated by sadism.

In the 1984 Dune, Piter was played by Brad Dourif. In the new film, he’ll be played by David Dastmalchian, who recently spoke to /Film about his role in the new Dune. He described Piter as “not like any human I’ve ever encountered before” and adding that “Piter de Vries was always utterly fascinating and disturbing and a dark place to go.”

Will Piter’s story differ from the Dune novel?

According to Dastmalchian, his take on the character draws a great deal of inspiration from Frank Herbert’s original Dune novel. But he’s also noted that the script presented the character faithfully. “It was kind of a no-brainer,” said Dastmalchian of getting into character, saying that he just listened to “what [Villeneuve] wanted him to look and move and feel like.”

Rumors suggest that Dune antagonist Feyd Rautha will not appear in the new adaptation (given that the film will reportedly cover only some of the story set forth in Herbert’s novel). It’s possible that Piter’s role as a scheming, behind-the-scenes baddie could be elevated in Villeneuve’s telling. In the novel, it was suggested that Piter is not only insanely evil but also a masterful plotter. Like the villainous Moriarity in Sherlock Holmes stories, Piter is content for people to perceive him however they’d like, sos long as his schemes are successful. Dastmalchian’s comments support this interpretation. In the same /Film interview, he said:

“With Piter, there’s that psychopathy that comes from being a twisted Mentat, that is frightening and disturbing. And to put myself in his mindset was hard... Piter’s brain operates at such a high level — he is for all intents and purposes, a human-computer — speaking in the highly specific way in which the language would come out was actually … It made perfect sense. It seemed to really add a great deal to the character.”

Again, Dune has a lot of villains, but these comments from Dastmalchian could mean that one somewhat minor baddie from the books might suddenly become a much bigger deal. Mentats are one of the more complicated concepts in the Dune books. And like Moriarity in the Holmes stories, Piter’s impact is much bigger than initially appears to be the case.

Arguably, this element of the character has never really translated well on screen. Here’s hoping Dastmalchian’s Piter is scary as hell and deeply involved in the complex plot to take down Duke Leto (Oscar Isaac). If Piter comes across as a clown, the plot of Dune — and its all-valuable Spice — just might not flow.

Dune reportedly hits theaters in the US on October 22, 2021. It will debut on HBO Max at the same time.