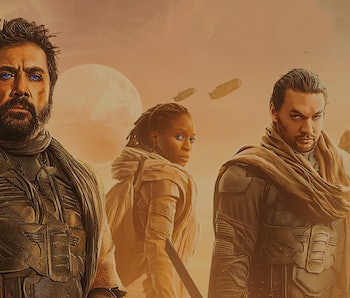 In Dune, not everybody makes it. If you found yourself getting attached to the star-studded cast of Dune: Part One, then heartbreak was just around the corner. Many characters don’t make it out of Dune alive, which in the case of a few of them will doubtlessly be hard if you didn’t expect these heroes to bite the Dune-dust. That said, not every death in science fiction is permanent.

Although the universe of Dune lacks time travel, it does have an interesting form of cloning. And, if the proposed Dune trilogy happens, then one dead character will 100 percent return. Here’s how it all works.

Massive spoilers for Dune: Part One and the novel Dune Messiah ahead.

In Dune: Part One, Duncan Idaho (Jason Momoa) dies in an utterly epic fight scene. In the novel, the basic set-up for this scene happens much as it does in the film. But the death scene itself is different, insofar as we see it. As Paul, Jessica, and Liet-Kynes try to escape, Duncan stays behind to fight off many enemy soldiers.

“Paul had one last glimpse of Idaho standing against of a swarm of Harkonnen uniforms — his jerking, controlled staggers, the black goat hair with a red blossom of death in it.”

And that’s it! Paul and his mom escape, and that’s the last anyone sees of Duncan in the novel Dune.

However, in the new film, we get to see how this fight went from Duncan’s perspective. Essentially, even though he was stabbed and left for dead, somehow Duncan rises, pulls a sword out of his chest, and keeps fighting. It’s one of the most memorable moments in the movie and perhaps one of Jason Momoa’s most badass scenes ever. And, if you never read the book, there’s a good chance you were floored.

The death of Duncan Idaho packs a much bigger punch in Dune: Part One than it does in the novel. Jason Momoa’s charming take on the character is one of the movie's highlights, meaning his death scene is strangely even more emotional than the death of Paul’s father, Duke Leto (Oscar Isaac).

Is Duncan Idaho really dead in Dune: Part One?

The answer to this question is: yes.

The original Duncan Idaho is dead. He died defending House Atreides against the Harkonnens and the Emperor’s Sardaukar soliders. However, in the novel Dune Messiah, the second book in the original series by Frank Herbert, Duncan Idaho does return from the dead as a “Ghola.”

How does Duncan come back from the dead in Dune Messiah?

Created by a group of genetically modified humans called the Bene Tleilaxu (not the Bene Gesserit, to be clear), gholas were essentially clones spawned from cells taken from a dead person. However, the definition of a ghola was that the person had to be dead for the genetic memory to be transferred over, which generally speaking isn’t true of cloning.

In Dune Messiah, while ruling the galaxy, the Tleilaxu give Paul a ghola of Duncan Idaho as a gift. From page 87 of Dune Messiah, this excerpt is from the perspective of Alia, Paul’s sister:

“It was Duncan Idaho. It could not be Duncan Idaho, but it was...Alia shuddered. There could be only one answer, this was a Tleilaxu ghola, a being reconstructed from the dead flesh of the original. That original had perished saving Paul. This could only be the product of the axolotl tanks.”

So, to be clear, this reconstruction of Duncan is not really the same character. But, for the most part, the gholas of Duncan retain his memories and act like him most of the time. To make things nice and confusing (this is Dune, after all), the first ghola was named “Hayt.” Also, non-Duncan gholas didn’t always have the memories of their predecessors; the Duncan gholas were special that way. And yes, that’s gholas plural. The ghola of Duncan in Dune Messiah is just the beginning.

When could Jason Momoa return to Dune?

If you only count the six novels written by Frank Herbert, some version of Duncan Idaho exists in ghola form in every single book. This is what is sometimes referred to as “serial ghola.” So, if the contemporary adaptation of Dune continues as a series of films, or even a TV series, conceivably, Jason Momoa could return to play Duncan Idaho once again.

Recently, Fatherly spoke to Momoa about this very question and whether Denis Villeneuve had broached the subject of gholas with him. Here’s what Momoa said:

“We had an initial conversation because at that point I hadn't read that far into Dune. So [Villeneuve] definitely mentioned [gholas]. And we haven't talked about it since.”

Would Momoa return to play the ghola of Duncan? In the same interview, Momoa said the answer is a big yes. “Oh, absolutely. Yeah. He's a phenomenal character. Absolutely. And Denis, I love him. So I mean, anything that's got his name attached to it, whether he's directing or producing, I would absolutely be honored and love to. It would be an honor,” Momoa said.

Here’s the only catch: The only way for the first Duncan ghola to show up in a Dune movie directed by Denis Villeneuve would be for the entire trilogy to get greenlit, not just Dune: Part Two. Villeneuve has stated on multiple occasions he wants to make a movie trilogy out of the first two novels: two movies for Dune and one movie for the book Dune Messiah.

So, Jason Momoa’s Duncan Idaho could return to the screen in a Dune sequel. But, it would be the second sequel, the hypothetical third film in Villeneuve’s proposed trilogy which would be an adaptation of Dune Messiah. That may sound like a long time to wait to see an undead version of Momoa’s Dune badass again. But if Dune: Part One taught us anything, sometimes the spice flows very slowly.

Dune: Part One is on HBO Max and in theaters now.