Denis Villeneuve tells Inverse about the changes he made to 'Dune' 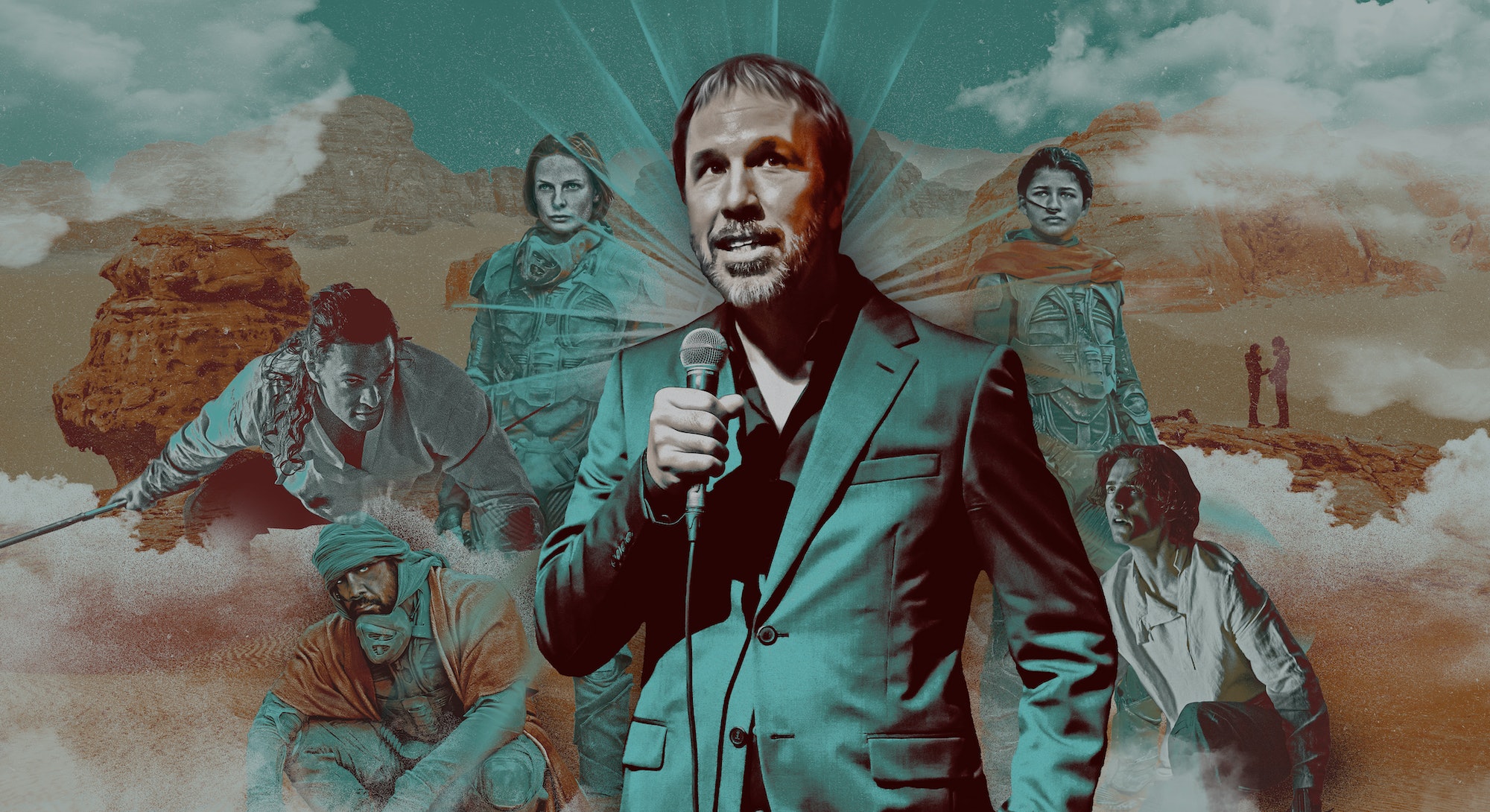 The world of Dune, Frank Herbert’s science fiction epic, is a vast and dense universe, where every detail is important but still can be interpreted in a myriad of ways. It’s no wonder Dune needs a GPS to stay on the true path.

“They were like the guardian angels,” Villeneuve tells Inverse. “They were there to make sure that we're respecting the canon.”

Having this trio involved during Dune’s production allowed Villeneuve to take his adaptation to a new level without sacrificing the story’s essence.

“He just wanted to make sure the canon was respected,” he says of Herbert’s role, adding that the two agreed on how to portray the Heighliner, a massive, galaxy-traveling ship previous adaptations famously got wrong by portraying as cylindrical crafts instead of planet-shaped behemoths.

“I wanted my mother to understand the movie.”

The director of Arrival and Blade Runner 2049, the 54-year-old French Canadian filmmaker describes his teenage introduction to Herbert’s seminal sci-fi story as a “visceral experience.” It informed a filmmaking oeuvre of high-concept, ambitious stories that he’s brought to life. Making Dune is a dream for him, but he didn’t make the movie only for the old guard, the series’ fandom, or himself, he says.

“I wanted them to feel the love we had for the book,'' Villeneuve tells me. “But at the same time, I wanted my mother to understand the movie.”

Featuring an A-list cast, including Timothée Chalamet, Zendaya, Oscar Isaac, and Jason Momoa to name a few, the movie follows Paul’s journey as the Emperor orders his family to move to Arrakis, one of the most dangerous planets in the galaxy. There, Paul’s family must oversee the mining of spice, a coveted psychoactive narcotic that fuels intergalactic travel.

Dune takes its time unspooling intergalactic conflicts and family dynamics, which is something new that Villeneuve brings to his Dune. He starts the movie as a quasi-political thriller, a familiar genre to help ground the audience in this intricate world. Once the film's major conflicts come to a head, the movie kicks off and Paul’s journey comes into focus.

Dune only shows one part of Paul’s story, and Villeneuve teases when viewers could see Paul come into his powers in Part Two.

“If we go to work on Part Two, or even a third movie, Paul will begin to foresee more and more and understand what those dreams are about,” Villeneuve says.

With Dune: Part One (opening on October 22 in theaters and on HBO Max), Villeneuve writes a bit of a love letter to fans. But his story is also approachable enough for newcomers to this visionary world.

In this interview, Villeneuve shares with Inverse:

Dune starts before the events in the book. Why was it so important to start the film before the book begins?

One of the main challenges of this adaptation was to make sure there wasn’t a need to read the book before watching the movie. I wanted the movie to be accessible. While we were in the screenwriting process, we found out that in order to understand the story, we'll have to make a slightly different introduction to make sure that everybody will feel welcome.

It's probably the main difference between the book and the adaptation.

I wanted the hard-core fans to recognize the idea, the poetry, the thematics, the atmosphere, the description. I wanted them to feel the love we had for the book, but at the same time, I wanted my mother to understand the movie.

Paul's visions of the future are very impressionistic. They don't mean exactly what the audience thinks. How did you depict his visions so they didn’t feel too confusing?

Paul can feel some elements of his future, and he realized quickly that these elements shift, that the future is unstable because of decisions being made in the present time. As I was making the adaptation, I said to myself, ‘I can express that the future is imprecise.’ I wanted the movie to feel as grounded, as realistic, and as relatable to our everyday life as human beings.

Paul sees images that have some insight about what will happen in his future. But those are dreams and they are puzzles. More specifically, at the beginning, all the decisions are difficult to decipher — like our regular dreams. So it's more like very strong intuitions. The images are like a poetic evocation of these emotions, like dreams.

“I'm standing with one foot in the air, waiting for the permission to make Part Two.”

There is no more tension if you can predict everything. It was much more interesting for the visions to be an enigma that Paul will try to decipher in order to understand what will happen. But he knows that some of these visions are very close to what could happen.

In the first part of the movie, he is like a beginner who is not in control of those visions. But if we go to work on Part Two, or even a third movie, Paul will begin to foresee more and more and understand what those dreams are about.

You’ve said Dune is critical of white saviorism. I saw that a bit in Paul's reluctant heroism and even in the Duke's plans for Arrakis.

When Frank Herbert wrote Dune, it was a warning about the danger of messianic or savior figures. It’s the story of a young man who falls in love with a culture, and wants to inspire and help the culture.

He will realize later that he himself is an instrument of colonialism.

That's what makes this book relevant and contemporary to today's questions. Something that we were trying to contend with at the beginning is the danger of Messianic figures.

Do you think we'll see that more explicitly in Part Two?

If I had all the money in the world, I would have loved to make a five-hour movie, but it was not possible. I had to split it into two parts. That's where I am right now.

I'm standing with one foot in the air, waiting for the permission to make Part Two, but it’s definitely a topic that will become much more elaborated on. That is what the project is about. That’s very important for me.

Speaking of a five-hour movie, was there a lot left on the cutting room floor for Part One?

What is on the screen right now is the director's cut.

There are scenes that are not in the movie that I loved, but it was not possible to include them. When I read the book at 13 or 14 years old, it was a very visceral experience.

For instance, there's a song sung by Gurney Halleck, played by Josh Brolin, that was absolutely beautiful that I had to take out of the movie. I'm very sad about it.

If I know that if Part Two is coming, I hope that I will be able to use it.

The bonds between Paul and his parents seem to be more focused, and they resonate much more deeply than in previous versions of Dune. Why was this important to you?

It's something I wanted from the start. When you make an adaptation, you have to make choices. One requirement I made to the screenwriters is that I wanted the female characters to be prominent.

I wanted Lady Jessica to be at the forefront of the story, and I wanted the story to focus on Paul and his relationship with his mother and father.

Because there are so many characters in the book, I really wanted to focus on Paul. Of course, the book is about Paul Atreides' journey, but there are a lot of side characters that are more important.

I had to focus the movie on Paul and his relationship with his parents in order to understand his psyche, his total journey, where he's coming from, and what he will do through in this story. I was trying to ground it with emotional realism that will speak to today's audience.

When you're thinking of the book's tone, and then the fact that this is a huge, mainstream movie, did you ever consider going for something different? Were you ever encouraged to do something lighter?

I take sci-fi very seriously. My favorite Star Wars movie is by far the Empire Strikes Back. Why? Because it's a dark, serious movie. Dune is a tragedy. So I didn't want to take away from the power of the story.

Of course, I wanted to create beautiful characters. I wanted Dune’s characters to be lively. I wanted to bring humor through Gurney Halleck and a bit with Duncan. I wanted it to have a breath of fresh air sometimes. But still, I didn't want to shy away from the power of the story.

At the end of the day, it's a boy who loses everything. I love it.

Brian Herbert, Kevin J. Anderson, and John Harrison are all credited in the movie. They're kind of like the old guard when it comes to Dune. How much did they guide you?

They were like guardian angels. They were there to make sure that we're respecting the canon. But we didn't have any issues with that. Brian gave me some advice, and he came on set with his wife.

He was pretty enthusiastic about all concept design and thought the set was quite impressive. It was really nice to have him with us as we were shooting in Budapest.

Can you share any advice that Brian had given you?

Sometimes, the descriptions in the screenplay led to some confusion. He wanted to make sure that everybody understood the heighliner was a transport that was crossing the galaxy but could not land on the planet. And, of course, we all agreed on that. He just wanted to make sure the canon was respected.

You once described your career as a series of karate belts, and I was wondering what belt do you think you're on now?

Wow, that's a good question. I don't recall having said that, but it's totally possible. Well, the truth is, when I started Dune, I learned so much making this movie. I had the impression that I was going back to film school.

I never had such a great time making a movie, and it was really an experience where I learned a lot about the craft and about how to make a movie.

I will not brag about the color of my belt. In fact, the great thing about my job is I feel that I am learning so much each time I make a movie. So, I don't know where I am right now as I cannot judge myself.