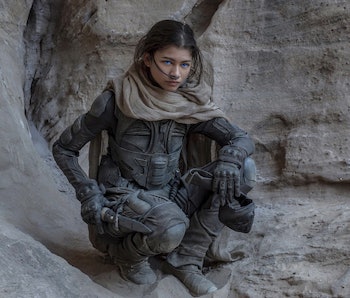 This is just the beginning! With those words, Dune: Part One’s ending becomes anything but a conclusion. Who is Chani in Dune? Why wasn’t Zendaya’s cool character in more of Dune: Part One? Here are all your burning Chani questions answered.

WARNING: Spoilers ahead for Dune: Part One and the novel Dune by Frank Herbert.

Denis Villeneuve’s Dune only covers the first part of its hero’s journey. The film’s final moments see Chani bring Paul Atreides into the fold of the Fremen, the fierce warriors who abide in the deep desert of the planet Arrakis, but that’s all we get of Zendaya.

If you’re looking for more information on Chani and what role Zendaya’s character will play in Dune: Part Two, you’ve come to the right place. Here’s everything you need to know.

Who does Zendaya play in Dune?

In Dune: Part One, Zendaya plays Chani, who in the books is born Chani Kynes, making her the daughter of the man known as Liet-Kynes. In the context of the new film, this would make Sharon Duncan-Brewster’s character — the new Liet-Kynes —Chani’s mother. Although, this connection is not made explicit in the movie. (And Sharon Duncan-Brewster and Zendaya share zero scenes together.) In the 1984 David Lynch film, Chani was played by Sean Young, just two years after she played Rachael in Blade Runner.

In all versions of Dune, Chani is Paul’s lover and eventually his partner in ruling the galaxy. Like Duke Leto and Jessica, Paul never marries Chani but instead marries Princess Irulan to institute himself into the Emperor’s family.

Chani and Paul eventually have twins, Leto II and Ghanima Atreides. (Chani does have another infant before this named Leto, who dies as a baby.) Like Padmé Amidala in Star Wars, Chani dies during childbirth in Dune Messiah, the first book sequel to Dune.

Why is Chani’s role in Dune: Part One so small?

Although she narrates the film's opening and plays a considerable part in Paul’s prescient dreams, Chani isn’t actually in much of Dune: Part One. But why? Well, because this film only covers about the first 500 pages of the novel, Chani doesn’t step into the action until precisely the point she does in the movie.

Just as in the film, Paul only meets Chani in person when the Fremen discovers him and his mother in the deep desert. Relative to the pages of the book that the film adapts, Chani’s role in this film is bigger than it is in the first half of the book.

What will Chani do in Dune: Part Two?

Director Denis Villeneuve has said that if Dune: Part Two happens, Zendaya’s role will be expanded significantly. This makes sense. In the rest of the book, Chani helps Paul lead the Fremen in the battle against the Harkonnen forces. This makes Chani much bigger than a Princess Leia figure in the rest of Dune.

In essence, she becomes the other main character of the story who isn’t Paul. As we already saw in Part One, Chani helps Paul understand the ways of the Fremen. But, in becoming his significant other, Chani also learns all about the ways of the Imperium.

In the end, she isn’t just Paul’s other half. She’s his better half.

Dune: Part One is now in theaters and streaming on HBO Max.