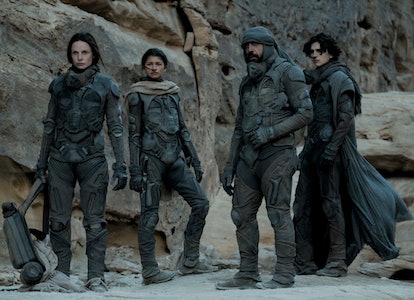 thCool spaceships are like currency for mainstream science fiction. If you don't have cool spaceships, the chances of your TV or movie franchise becoming a hit are automatically lower. The fictional spaceship innovations of both Star Trek in 1966 and Star Wars in 1977 proved one thing: Spending a lot of time on the production design of sci-fi spaceships was worth it. The Enterprise and the Millennium Falcon are so important to the success of their respective franchises, they're practically characters themselves.

But is this true of Dune? Do Paul and Duncan have a starship ride that is the equivalent of Mando's Razor Crest or even Star-Lord's Milano? The answer is...no. And more to the point, Dune 2021 shouldn't try to jam "cool" spaceships into the movie. Part of what makes Dune so unique is that it's a space opera that doesn't care about cool spaceships at all.

Dune isn't actually about space travel. I know. I know. The struggle to control the Spice — a substance that makes space travel possible — is the central conflict of the first Dune novel. But, somewhat realistically, author Frank Herbert avoids depicting space travel as some wondrous journey or a heart-pumping setting for starfighter dogfights.

From a bookish science fiction point-of-view, the most interesting ships in Dune are the Spacefolders, or more specifically, the Heighliners. These are starships that basically move other ships and equipment across vast stretches of outer space. They're like if semi-trucks were responsible for having fleets of ships inside of them.

In a sense, you could think of the Heighliners like the Star Destroyers of Dune, but you'd also be mischaracterizing their purpose. In Dune, spaceships are, by and large, just a way to get around, meaning that extra-layer of characterization other science fiction franchises give their ships just isn't there.

Yes, in the various prequel and spin-off novels written by Brian Herbert and Kevin J. Anderson, you do find a slow influx of more traditional "cool" spaceships, mostly because in those (non-canon) books there are a few pivotal spaceships with names like the Dream Voyager.

Will Dune 2021 have cool spaceships?

"Cool" spaceships that become pseudo-characters are not the norm in the Herbert books, and so, it follows, that the 2021 Denis Villeneuve version will probably follow suit. So are there any cool rides in Dune? Will our heroes have some kind of recognizable vehicle that Warner can merchandise for a quick buck?

The answer is yes, but not in space. Other than riding the Sandworms themselves, the coolest vehicle in Dune is probably the Ornithopter. Often just called a "thopter," these are kind of like helicopters, but with bird-like wings. In the Dune Encylopedia (also not canon), it's implied that the design of the Ornithopter is an outgrowth of the ban against "complicated machinery" brought on by the Butlerian Jihad, a historical event in Dune's past that led to robots and A.I. becoming basically illegal. Narratively, this event also allows for the science fiction of Dune to have a naturalistic and analog feeling. All the tech in this world is easy to understand, even if it has a funny name.

This leads us to the real reason why Dune doesn't – and can't — have cool Star Wars-style spaceships. The one feature that makes Frank Herbert's first novel both timeless and unique is that it's science fiction that barely feels like science fiction. The people in this world don't regard space travel as cool, and so, there's no metafictional moment for the reader where we are told these ships are cool.

This is the triumph of Dune's realism: spaceships so realistic, and so functional, you hardly even notice they're there at all.

Dune is expected to hit HBO Max and theaters on October 1, 2021.

How have your streaming habits changed during the pandemic? Take our survey!