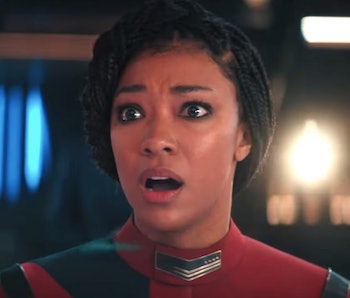 By the end of Star Trek: Discovery Season 3, the crew of the titular time-displaced ship from 2258 were given new uniforms and a totally souped-up ride. This meant that Captain Michael Burnham finally took her rightful place in the center seat of Discovery, but it also meant the crew traded their blue jumpsuits from Seasons 1 and 2 for the more laid-back all-grey uniforms of 3188.

The final shots of “That Hope Is You Part 2,” ended with Captain Burnham and the crew rocking these new threads, but now in the first trailer for Discovery Season 4, the crew has changed clothes again. This wardrobe change is almost as significant as the confirmation of Season 4 arriving at some point in 2021 — almost.

With the release window out of the way, are the new Starfleet uniforms just a new aesthetic choice, or does this suggest a time-jump in between Discovery Season 3 and Season 4? Check out the new trailer below and let’s piece it all together.

During the virtual Star Trek celebration event First Contact Day, Discovery star Sonequa Martin-Green revealed an unexpected trailer for Season 4, which is set to bow later in 2021. The trailer is filled with all kinds of hints at what’s ahead in the new season when it arrives later this year, and the Discovery crew’s latest makeover is no exception.

To be fair, the design of these uniforms is pretty much the same as what we saw the crew wearing in the Season 3 finale. The biggest difference is that these uniforms have very prominent Star Trek colors. Burnham is rocking all red, just like Picard, Sisko, and Janeway did, while Owo and Detmer are appropriately rocking the gold associated with operations and engineering. Tilly, Stamets, and Culber are all in blue because they’re all very science-y.

The prominent uniform color-coding is obviously an homage to the TNG-era of department coloring which continued through Deep Space Nine and Voyager and was all present with understated splashes of the same colors in Discovery Season 3. This season, however, the show is basically shouting, with the TNG-era uniform colors: “This. Is. Star Trek!”

The bigger wrinkle with the uniforms is the simple fact that the clothes are new at all. This could suggest that a decent amount of time has passed between Season 3 and Season 4. Long enough for Starfleet to issue some new uniforms, or at least enough time for Burnham and company to change clothes again.

To put this in perspective, unless the crew changes clothes twice in the span of a week, then Discovery Season 4 has to take place some chunk of time after Season 3.

The trailer also shows the Ni’Var (Vulcan) President T'Rina (Tara Rosling) — who we met in Season 3 in “Unification III” — exchanging greetings with someone who appears to have vaguely Cardassian features. Could this be the Federation President? In Season 3, one very small Easter egg confirmed that the Cardassians are members of the Federation in the 32nd Century, so maybe that’s who this new character is? Either way, last we saw T’Riana was in the finale of Discovery Season 3, returning to Federation HQ to open up diplomatic talks. So, if she’s back, and Ni’Var is part of the Federation again, then that could suggest a small time jump, too. Maybe a year?

Finally, although Saru left the Discovery to live on Kaminar at the end of Season 3, it seems like he is linking hands with Burnham in the final shot of the trailer, and that they are both wearing red. So, perhaps, at some point this season Saru will rejoin Starfleet. Unless of course, that’s a totally different Kelpien in those red sleeves...

Star Trek Discovery will debut in 2021. An exact release date has not been set.