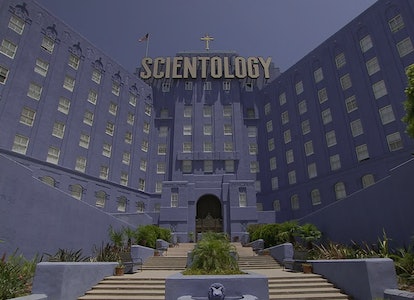 “Cult” is a difficult thing to define. After all, a group of people who ascribe to a certain belief system could simply be defined as a religion. This 2015 film follows a group many onlookers would describe as a cult, despite the group winning the legal right to be recognized as a religion.

Going Clear: Scientology and the Prison of Belief is an HBO original documentary from director Alex Gibney following the rise of Scientology from an experiment run by a pulp fiction sci-fi author to a major figure within Hollywood and politics.

The documentary charts Scientology’s origins as a semi-scientific book called Dianetics: The Modern Science of Mental Health. In this 1950 book, author and Scientology founder L. Ron Hubbard suggests the only way to truly achieve wellness is by “going clear” and freeing one’s self of “engrams” — or remnants of painful or harmful memories.

Much like the more recently formed Hollywood-focused cult NXIVM, Scientology began as a self-help course designed to guide people out of past trauma through “auditing,” a kind of talk therapy that just so happened to help those in power create files containing blackmail material.

Going Clear dives into the darker side of Scientology by interviewing many former members and loved ones of current members who recount horrific human rights violations, child abuse allegations, and invasive public relations practices. Under the watchful eye of Hubbard and his successor David Miscavige, Scientology became an organization marketed towards celebrities like John Travolta and Tom Cruise, who would be given special treatment in return for their PR clout.

One of the most fascinating chapters in Going Clear follows the group’s fight to be considered a religion in order to get a tax exemption from the U.S. Government. It asks the question of, legally, how do you define a cult, and what can you do to keep fraudulent groups from claiming religious tax exemption? In this particular case, the answer is: not much. Despite all the allegations, the Church of Scientology won out.

Going Clear is extra affecting because of how truly massive Scientology has become. Sure, documentaries about small cults can be a fascinating case study, but Scientology is big enough to have inspired both an SNL sketch and an Oscar-nominated film. That kind of impact is what newfound cults dream of.

L. Ron Hubbard created Scientology with the hope it would change the world. Going Clear proves that his hopes were achieved; the more pressing question is whether or not the world was changed for better or for worse.

Going Clear: Scientology and the Prison of Belief is now streaming on HBO Max.

More like this
Entertainment
8.4.2022 4:14 PM
53 sci-fi and DC shows and movies on HBO Max you need to watch ASAP
By Jake Kleinman, Eric Francisco and Ryan Britt
Culture
8.8.2022 11:30 AM
You need to watch the most underrated time-travel thriller on HBO Max ASAP
By Dais Johnston
Culture
8.3.2022 9:00 AM
7 amazing sci-fi shows and movies coming to HBO Max in August 2022
By Robin Bea
Related Tags
Share: